I've tackled that mess at the end of the garden It took me almost all of yesterday morning to cut out the weed suppressant that was buried under 2+ inches of weeds beneath the pergola thing. I could then see what was supposed to be growing up the posts. 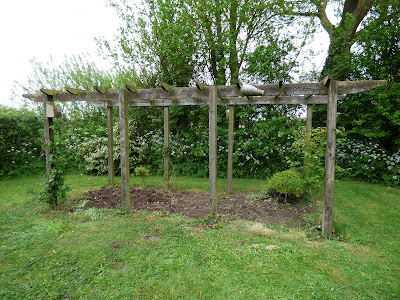 There are roses at two of the posts, but they aren't climbers, an almost dead honeysuckle and a nasty looking vine of some sort. Also 2 Hebes ,which are not my favourite shrubs although Mrs F must have liked them as there are others around the plot.
So nothing that has to be kept and then we found that several of the posts are rotten at the bottom, so that clinches it.................The Thing at the bottom of the garden will be taken down.
It needs some soil to level it with the grass surrounding and then we can mow regularly which will get rid of the weeds and the wood will be cut up to keep the wood burner going for several evenings. There are two big ash trees in the hedge-line boundary just behind the pergola, between us and the field so this area isn't much good for growing.

It was a good day job-wise as  I also planted the blackcurrant then we got the  screw eyes in the greenhouse and the wires threaded through ready to tie up  the cucumbers ............when they grow.. Col visited his Dad and mowed with the ride on mower.

Also had a letter yesterday from the tax office telling us what Col will be allowed from  ESA and  his County Council pension before they start taking tax off, so  we are getting nearer to learning what we have to live on while Colin is still having treatment.

Many thanks for all the yogurt comments yesterday. It's strange to think what a large part of the fridges in supermarkets are taken up by all the different types of yogurt in 2017 when  it was virtually unknown 50 years ago.We've been persuaded it is something we need when actually we could easily live without it if we had to!

Back Shortly
Sue
Posted by Sue in Suffolk at 06:30
Email ThisBlogThis!Share to TwitterShare to FacebookShare to Pinterest
Labels: The Garden