I picked Colin up from hospital  Friday lunchtime, he is OK except for being very tired and no energy at all. Last Tuesday evening he started to have a bad reaction to the Chemo tablets, which were restarted at the higher rate he was on when they were stopped 3 weeks ago. The "joy" of being a guinea pig taking drugs that have hardly been used before means that the doctors are not sure how patients will react. Nurses on the oncology ward called in a doctor over night Tuesday and he was monitored closely, given various things to counteract the toxins  and eventually sent to Critical Care but by then things were stabilising. Blood levels quickly picked up again and as he was off antibiotics they said he could come home for the weekend and then will go back in again during this week when the Venetoclax will start again but back at the low dose, he'll be in for just a couple of nights.............we hope.

He was  pleased to get out into the garden for a while in the sun on Saturday morning to see what I had been up to in his absence. While he watched on I weeded the beetroot and raised the wire mesh over them and took the fleece off, then pulled the long grass and buttercups from round the edges of the beds. He then spent the rest of the day with his feet up in the conservatory, getting some much needed vitamin D and sleep.
I  eventually managed to get the small mower going - with the miracle that is Easy Start - and did a bit of grass cutting around the beds and in the bits that are too small for the big ride-on mower. Then it rained...........again. After weeks without we are suddenly getting Too Much. So the ideal time for a bit of card making. 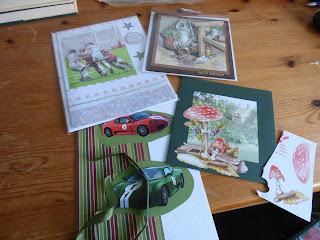 I'm seem to be stuck on 3D decoupage at the moment, it doesn't take a lot of brain power!

Thank you for comments about the unusual and expensive fruit. White blackberries certainly don't appeal to me at all.

Back in a jiffy
Sue
Posted by Sue in Suffolk at 06:30
Email ThisBlogThis!Share to TwitterShare to FacebookShare to Pinterest
Labels: Card Making, Non Hodgkins Lymphoma