The first lettuce from under a plastic cloche (Mrs F left 2 tunnel cloches here which have been very useful) was cut a few days ago, so that's lettuces, radishes and chives to eat - not quite self-sufficiency but better than nothing. In a year or two there should also be asparagus (we planted 10 crowns and see signs that 8 are alive) and rhubarb at this time of year. 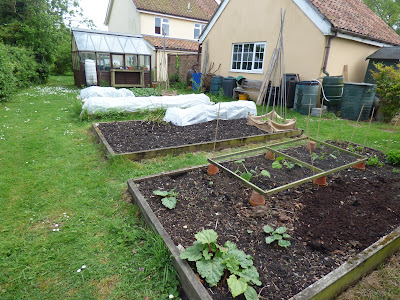 The runner beans have begun to climb the canes and I've also planted out my climbing French beans and put a little fence made of sacking around them to keep the wind off until they get going as I did with the runners.  Three courgette plants are under a mesh frame to keep next door's cat from laying on them...........she prefers our garden to theirs for some reason. Polly rarely lays about outside, preferring a bed or a chair indoors! There are several rows of beetroot under fleece for the same reason.............and to stop birds pulling them up. The first lot sown were sparse so gaps have been filled with new seeds which are now all germinating.
Our 20 potatoes plants are all looking healthy. They were all under fleece protecting them from the late frosts the other week but I've pulled the fleece back to slow the second-earlies down a bit.
Then under the other little polythene tunnel cloche are the chard and mange-tout peas with room for more later in the season. I started the peas in pots in the greenhouse in the hope they will survive all pests. I've got a heap of sticks there ready for them to clamber over when I take the cloche off.
16  Brussel sprout plants arrived in the post yesterday (Yes I've Cheated) 8 for us and 8 for Col's brother as that number is the cheapest way to buy and we don't need them all. So a while after the top photo was taken I was outside planting them and had to take another photo. 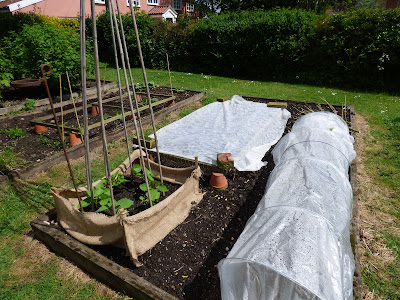 Mrs F left several wooden frames covered with wire netting and also lots of clay pots, and that's how I've covered things...........using the pots to support the frames. The sprout plants also have fleece over the frame to shade them until they get established. (The house in the picture is next door and is up for sale...........for £100,000 more than they paid for it 18 months ago! I know they had a new kitchen and bathroom, but good grief, things haven't gone up that much). There is space for another tripod of Climbing French beans, runner beans  and for 8 Purple Sprout Broccoli plants which will arrive in July. They will be our only brassica plants, being the things that produce the most from least space. Sadly no room for cauliflowers, calabrese or cabbage.


On the edge of the driveway, so they can trail without getting in the way, are three squash plants which I put in 3 tyres filled with soil and compost. Each tyre is sitting on some material stuff we found in the workshop, it lets water through but not the soil. I hope when the squash have finished I'll be able to clear away the tyres and drag the soil on the cloth stuff across to the veg beds - that's my plan anyway. To keep the plants from being blown about I pushed a tile upright on the side of the prevailing wind. 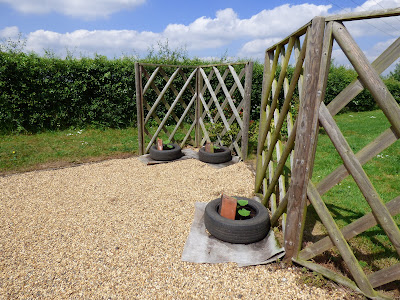 Into the greenhouse and there I have some Basil, 5 plum tomato and 4 cherry tomato plants and 4 cucumber plants, although I shall only keep 3 as there isn't room for more.........and I've run out of big pots anyway... ......the greenhouse has a solid floor so no borders to plant in. 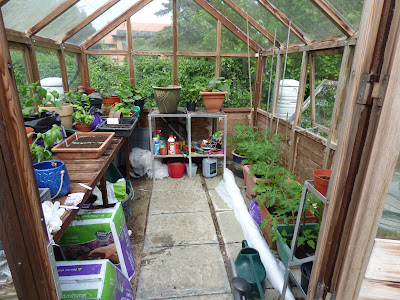 On the staging on the left I've got 4 aubergines and several pepper plants - hopefully more sweet peppers  than chili peppers but I'm not sure as some didn't get labelled properly (oops). Two sowings of leeks eventually produced a few seedlings and I've potted 2 dozen into bigger pots with more to do later and I've also just sown more runner beans.  There are a couple of spare courgette and squash plants.......just in case.......... and last but not least the fig tree which is looking well and my £1.99 grapevine - which I picked up from QD in Stowmarket a few weeks ago.

It's been an interesting challenge to work out what not to bother with in the limited space and we may regret something and change plans next year or we might find we have more room for things this year and pop in a few extras later. Actually it might be interesting to do a post on what we're not growing and why .............well, interesting for me!

I've just found my penfriend from Michigan has a blog HERE

PS Thanks for nice comments yesterday