A water butt that leaks all down the side where the seam had split is useless for water BUT Col had a brain-wave and with a rest in between each part of the job he cut the barrel in half, found and cut a piece of plywood for each end, bolted the bits on and look what we have now. 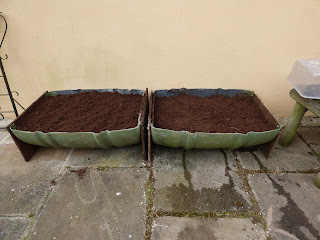 Just right for cut and come again lettuce plants and other salad leaves - not far from the back door.  Brilliant, and it will free up space  for other things in the veg. beds in the garden.

It turns out that "the nasty looking vine" ( mentioned the other day as one of the things on the pergola thingy,) is actually a hop. Mrs F said it should have been a golden leaf variety but wasn't. So it will be kept  as I love the smell of dried hops.........there could be a plan for hop pillows and we have an idea for giving it something to climb over that's better than just a post.

During yesterday morning Col turned really cold and shivery, which with him is always a bad sign, and sure enough he was running a high temperature. So a phone call to the oncology ward and he is now in hospital for a few days so they can give intravenous anti-biotics.

Posted by Sue in Suffolk at 06:30
Email ThisBlogThis!Share to TwitterShare to FacebookShare to Pinterest
Labels: The Garden