The horrible wet, cold and especially windy weather in the first half of March wasn't conducive to car boot sales so when at last things calmed down it was a sure thing that I'd be there.

As usual the Grandchildren  were the main benefactors. Sand  toys were £1.50 for Willow  and a puzzle for sometime in the future....£1. (I'll probably get her a sandpit for Christmas but get it early so it can be used towards the end of this summer when she's one and a half). 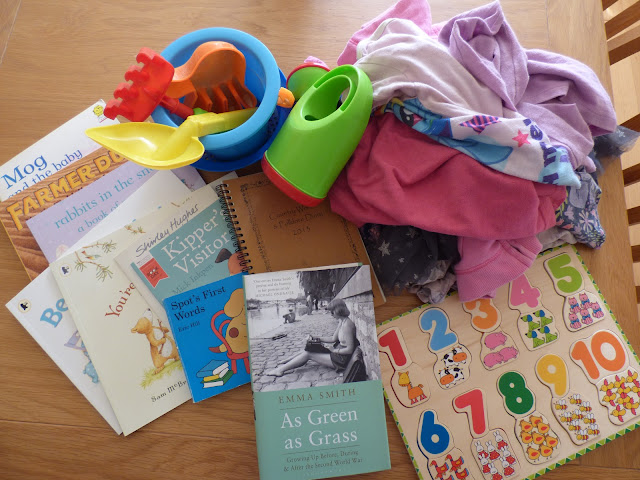 Clothes for Florence for the summer were £2 and a big bundle of mostly brand new books to share out came to £3.20p. The Emma Smith book for my WWII collection was  50p. The other book there, another 50p, is probably the oddest thing I've bought - a 2013 Diary, in other words a diary that's 6 years out of date (What sensible person buys a 6 year old diary for goodness sake!) but it's an earlier version of The Country Wisdom and Folklore Diary that I've used for the last 3 years, so will have bits of folk stories that I might be able to use in the blog and I'm thinking about cutting bits out of all the old Folklore diaries to keep before I chuck them out.

I also bought two large perennials for £2.50 each, but can't remember what they were called.One was something beginning P U L S and has purple flowers rather like an anemone and the other is something that has leaves like an Iris and began with C A L A and in late spring will have tall spikes of white flowers. Whatever they are they are new to me and the garden and I soon got them planted out. To make a bit of space I dug out some of the bluebells, which have spread like crazy and moved them down to the meadow.

Next time I'm at a boot sale I'd better look out for something for Jacob.....more cars probably.

Back Tomorrow
Sue
Posted by Sue in Suffolk at 06:00
Email ThisBlogThis!Share to TwitterShare to FacebookShare to Pinterest
Labels: Car Boot Bargains