The WI in March


At big WI we found out all about journaling, I thought this was much like scrap-booking but I was wrong. It seems a bit more adventurous, using paints and making little books and envelopes to go inside the journal. 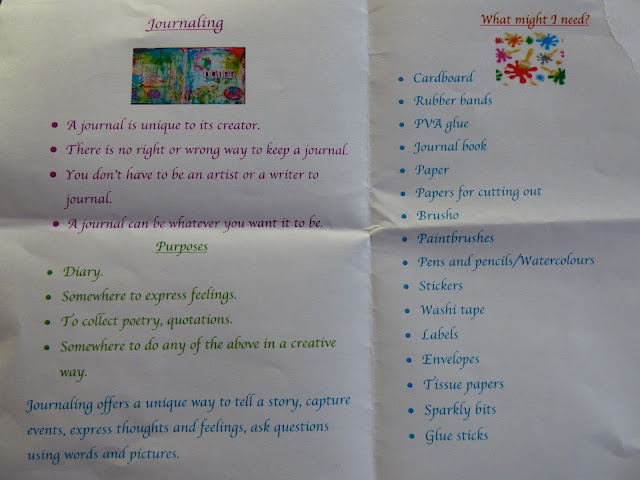 The lady had started journaling as a relaxation after retiring from primary school teaching. She bought several journals along, so we could see how she made them and she also brought a couple of others made by primary school children and members of the journaling group she runs at her house.

They looked interesting and would be a good way to use up all my craft stuff but  I don't think I have enough hours in the day unless I was to stop blogging!

Coffee and cakes as always were delicious.


At small  WI a lady came to talk to us about her father, now in his 90s he was a Bevin Boy during the war. She has done this talk many times so was very fluent.

He was a Suffolk boy born in a village near Hadleigh and had rarely left the county but when he was 18 in 1943 he was called up to be a miner. He'd been in the Army Cadets and had hoped to be called up for the Army but he was the 1 in 10 young men who went down the mines.

The government had failed to make mining a reserved occupation early in WWII so many young men who were miners left as soon as possible to join up ........although mining might have been a family tradition for decades there were not many people who actually loved the job. Of course after a few years of war and older miners retired there was a huge need for coal to keep factories running and a drastic shortage of miners, hence the ballot where 1 in every 10 men were ordered to serve as miners. There was no getting out of it what ever your background or class and it must have been a huge shock for so many 18 year olds.

Her father was sent off to the the Nottinghamshire/Derbyshire border collieries where they had 4 weeks training before starting work underground in the awful conditions of the time.

One of the sad things about these men was that their war work was never recognised. They were civilians and had no uniform, so when on leave were often shouted at for not doing their bit for the war effort. The pay was bad, less than the equivalent for the armed forces. After war ended they were not allowed to leave the mines for another 2 or 3 years, there was no organisation to recognise their work, the British Legion wanted nothing to do with them as they weren't in uniform and when mining was Nationalised all the records were destroyed. For 50 years they campaigned to be allowed  to parade at the Remembrance Day Cenotaph service and were finally allowed just a few years ago. There was also no memorial to those who had died while working in the pits but this too has recently been rectified and is part of the National Memorial Arboretum.

The speaker had thought about writing a book about her father but decided instead to spread the word through talking to groups. There are only a few Bevin Boys still alive, all in their 90's but the Association carries on, to collect and store information and to keep the memories of these young men alive.

In 1943 this country faced a crisis in coal production as there was only three weeks of coal stock available. This put the country’s ability to win the Second World War in jeopardy.
The then Prime Minister, Winston Churchill, charged Ernest Bevin, Minister of Labour and National Service to increase coal production.
Mr Bevin decided that from all 18 to 24 year old men conscripts drafted to serve in the armed forces one in ten were to be directed – on pain of imprisonment and irrespective of background or ability - to work underground in British coal mines.
Approximately 48,000 Bevin Boys (as they came to be known) undertook unskilled manual jobs to release more experienced miners to move on to coal production at the coal face.
The role played by Bevin Boys should not be lost to history

There is much more about The Bevin Boys HERE

It was a fascinating talk followed by coffee and cakes again.