The clocks go back to Greenwich Mean Time at  2am but why do we change them twice a year?

I found this book which explains everything. 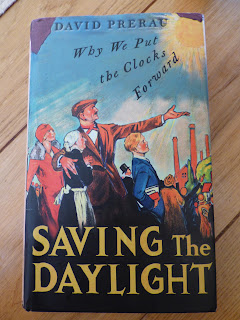 The book also explains how time was measured in earlier days and how the railways brought the standardization of time through the country and how time zones in the USA and other large countries became the norm.

The first mention of anything relating to daylight saving is by Benjamin Franklin who was staying in Paris when in 1784 he was awoken by the sun streaming into his room and was amazed to find it was daylight at 6 a.m - he normally didn't get up until noon! He worked out that Parisians would sleep through 7 hours of daylight but then need expensive candles to light them in the evenings. He reckoned by using sunlight instead of candlelight for their working day for 6 months of the year they could save 64,050,000 pounds weight of wax and tallow.  (he was assuming all Parisians slept until noon!). He wrote and put forward a plan for a 4 point "Economical Project"

1. let a tax be laid....on every window that is provided with shutters to keep out the light of the sun
2. let no family be permitted to be supplied with more than one pound of candles per week
3. let guards be posted to stop all coaches, etc in the streets after sunset
4. every morning as soon as the sun rises , let all the bells in every church be set ringing; and if that is not sufficient. let cannon be fired in every street, to wake the sluggards effectively, and make them open their eyes to their true interest.

which( unsurprisingly!) wasn't taken up.

In the summer of 1905 in England, William Willett  was up at 7am, taking his early morning horseback ride. He was a well known designer and builder of stately homes, a fellow of the Royal Astronomical Society.
As usual he was the only person up and about except for a few postmen, milkmen or labourers and as usual he found it difficult to understand why his countrymen were wasting the best part of a summer day. But then at the end of the day their hobbies and activities (he was a passionate golfer) would have to stop  when it got dark in the early evening.
One day he came up with the idea of shifting the clocks forward to save daylight so that early morning's wasted sunlight could be used in the evenings without altering the time that people woke up.
In July 1907 he distributed a pamphlet "The Waste of Daylight" and started a campaign for the adoption of summer daylight saving time in the UK. On February 4th 1908 the MP for Leek, Robert Pearce, introduced a bill in Parliament " Pearce's Daylight Saving Bill". By March he had the support of 200 MPs  but more opposed it so it never became law. Willet carried on pushing his idea until he died in 1915.
Meanwhile other countries had heard about the idea and Daylight saving bills were introduced in Germany, Canada, New Zealand and parts of Australia.
It was WWI that persuaded governments in many other  places to adopt the idea of making more use of daylight in summer by changing the clocks.

During the second world war GB adopted Double summer time, two hours forward. My Dad had just finished school to help on his parents farm and I can remember him saying how difficult it was for farmers with milking cows - because the cows didn't know about clocks and daylight saving!

Since then, every now and again there are ideas to change things. Some people would like British Summer Time  all year round and Double Summertime through the summer (me!) others would like us to align ourselves with mainland Europe. It's discussed on radio and TV every October but at the moment there is always opposition to any changes - mainly from people in Scotland! (Apologies to all readers from North of the border - just quoting the book!!)

Have a lovely weekend everyone.

Posted by Sue in Suffolk at 06:00
Email ThisBlogThis!Share to TwitterShare to FacebookShare to Pinterest
Labels: History