Well Strictly fans, it's all over for another year. I wasn't bothered who won really but decided after the dances that Kelvin and Oti were best, so  was pleased they lifted the trophy. Now I'll have to go back to watching Look East instead of Takes Two............ Dull, Dull, Dull!

Thought I'd better try a small journey for my first time driving after hurting my knee so I went down to the village hall to cast my vote on Thursday, not that my vote makes much difference as most bits of Suffolk have been blue conservative for a Very long time.
As the knee seemed OK  -   I went a bit further to the Community shop in the next village to pick up a copy of the  Double Issue Festive Radio Times. I can't imagine Christmas without it and enjoy browsing through looking for something interesting. 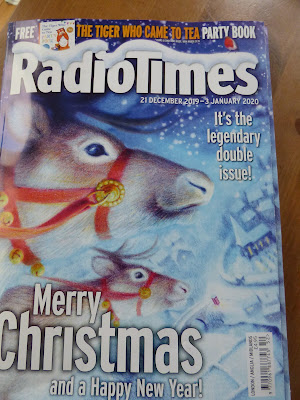 There is often a free children's book advertised in the Christmas Radio Times. This year it's The Tiger Who Came to Tea Fun Activity book. BUT it's only free if you happen to live near a Ryman store. My nearest is upstairs in The Sailmaker's centre in Ipswich - at least I think it's still there, you never know with Ipswich shops.

Sat 21st  Show jumping From Olympia
Celebrity mastermind ......on i player because clashes with

Thanks for commiserations yesterday, a week after the injury the knee is tons better and won't get mentioned again!......
The company who run the physio service in Suffolk on behalf of NHS are brilliant and as soon as I'd referred myself online they emailed back with exercises to help and I just need to ring and make an appointment. I think I'll only need to go as far as Eye..... 5 miles....handy.