December 22nd and the Winter Solstice

According to my Folklore diary Winter starts today, although meteorologically  it started at the beginning of December.
The winter solstice marks the date that the Earth is at its maximum tilt from the sun and that was at 04:19 this morning, it is the first time in four years that it hasn't fallen on 21 December, the solstice's most common date, although on rare occasion it can also occur on the 20th or 23rd. London will have just 7 hours, 49 minutes and 44 seconds of daylight, but from now onward the length of daylight hours increases........... imperceptibly at first but by this time next month there will be 1¼ hours more daylight................Reasons to be cheerful Part1!

The Winter segment of the turning wheel from Celebrations of the Seasons by Jennifer Cole. 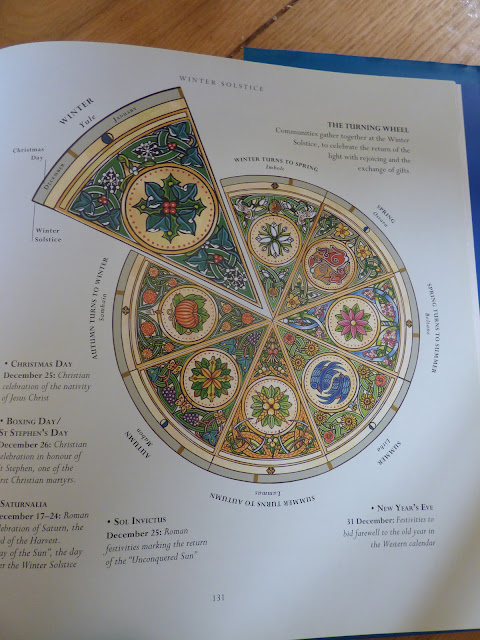 Special places have always been used to celebrate the Solstice 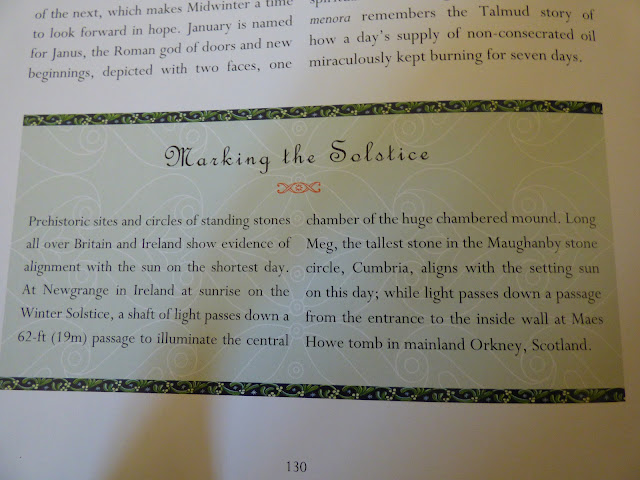 I found this poem a couple of years ago

The Shortest Day by Susan Cooper

And so the Shortest Day came and the year died
And everywhere down the centuries of the snow-white world
Came people singing, dancing,
To drive the dark away.
They lighted candles in the winter trees;
They hung their homes with evergreen;
They burned beseeching fires all night long
To keep the year alive.
And when the new year's sunshine blazed awake
They shouted, revelling.
Through all the frosty ages you can hear them
Echoing behind us - listen!
All the long echoes, sing the same delight,
This Shortest Day,
As promise wakens in the sleeping land:
They carol, feast, give thanks,
And dearly love their friends,
And hope for peace.
And now so do we, here, now,
This year and every year.

So much for circling things to watch in the Radio Times, the first things I wanted to see were only on if a Liverpool football match wasn't on TV in the evening - and it was because they qualified for something?  Then I found Swallows and Amazons - the more recent film - was on and as I'd re-watched the older version and loved it all over again last week I decided to re-watch the this newer and in my opinion not very good film,  and that meant I missed the next thing circled. But that was OK as it was on the 5 catch-up channel, which I can now watch on my new TV.
Reasons to be cheerful part 2!

Thank you to everyone for comments - I love it when someone who's never commented before says they enjoy reading the blog.

Today I will be singing carols and having lunch with Colin's sister and brother .........Reasons to be cheerful Part 3!