December 3rd and The Robin

I now have a TV aerial affixed to the side of the house and a brand new up-to-date bigger TV wot-does-things! So far I know how to turn it on and off and change channels. I shall learn more I expect as time goes on.

Now here's a silly thing...........................Very nice bloke fixed aerial up, ran wires along etc and got the outside sorted. Then he came in and unpacked the TV and said " I don't believe it - this TV has Freesat built in as well as Freeview!" "WHAT" said I, "you mean to say I didn't need to have an aerial at all, it would have run off the existing dish?!" He said " I fitted a TV that was the same as this last week and it didn't have Freesat built in, they must have had this slightly different model into stock and no-one knows!"
After he'd sorted everything out and showed me how to work the TV and packed up and left. I rang the shop, explained about the inbuilt Freesat and why had they sold me an aerial I didn't need and there was a deathly silence.........long enough for me to say "are you there?". Yes, he was still there and was completely dumbfounded, he was looking up the specifications online, no mention of Freesat being on this TV. How odd.  He asked me if I wanted the aerial taken down and a refund as I'd been mis-sold.......I said I'd think about it, but it seems a bit pointless as the Satellite dish is quite old so could well disintegrate sometime and now I have a choice between two ways of picking up a signal, which might be useful...........
Although in a few years time we probably won't need aerial or dish as  we'll access new TV's through our broadband connection and search the WWW through the TV screen. That will be exciting??!! I wonder how much it will cost? and they'll have to be big improvement in internet connections for some parts of the UK............Oh I forgot............that's one of Boris' or that other blokes promises!(can't remember which as I've forsworn all election debates etc for the foreseeable future!) 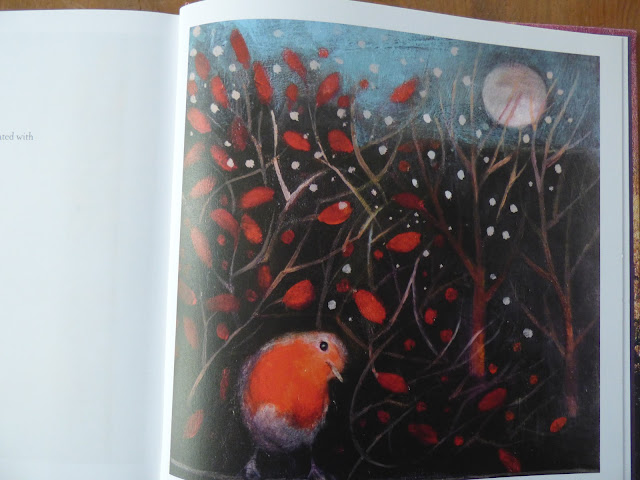 The reason we have robins on so many things at Christmas is explained in one of my little books that I've had for years. 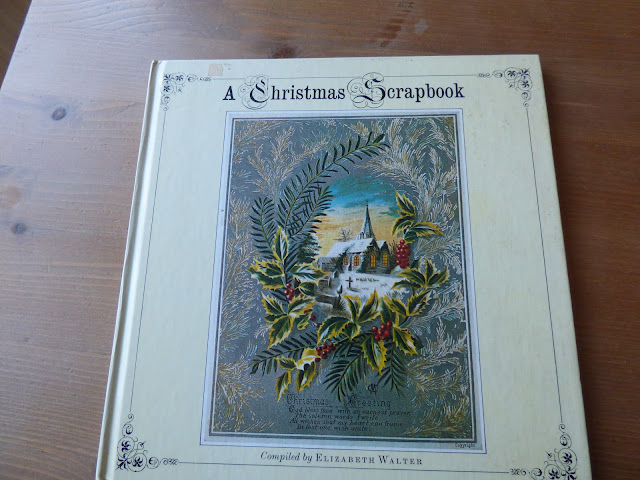 To Quote " Robins choose their mates as early as December so their plumage and song are at their best when other birds' are dull and mute..........................The Introduction of the penny post in 1840 also led to the robin being used as a symbol on Christmas cards and early postmen wore royal red uniforms and were sometimes called 'Robin Postman' "

There's a robin on my Christmas bell 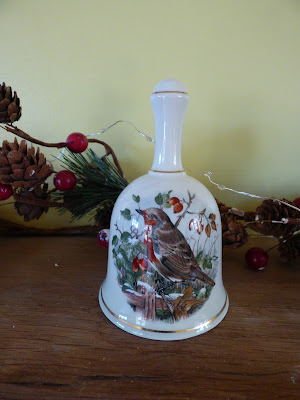 I wonder how many Christmas cards will feature a robin this year?
I'd love to have a friendly robin like the one that Joy found in Bury Abbey Gardens and one does visit the bird feeders but not friendly enough to pose for photos.

Posted by Sue in Suffolk at 06:00
Email ThisBlogThis!Share to TwitterShare to FacebookShare to Pinterest
Labels: Advent Photos 2019