Emptying the 5p money box is not as much fun as it used to be. That was before all the money laundering rules when you could walk into a bank with your bags of change and they would give you notes in return. Now you have to pay it into an account and it sort of disappears into the general pot.

Why they think you would be laundering illegally earned money in 5p pieces I have no idea. 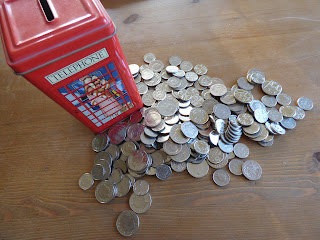 Anyway once again all year I've been emptying my purse and putting the 5p's* that get stuck in the corner and some 10p's* in the tin. I found several 20p's* there too. I also had £2 worth of  2p and 1p coins in another tin where I chuck them if I have too many in my purse

So I added up, bagged up as per bank instructions, found some more 20p's* left from car boot change to fill another cash bag and will pay a grand total of £32 into the bank. There was about a pounds worth of 5p's* to go back in the tin to start the collection for Christmas 2020. So although this was my money anyway it feels like £32 that I didn't know I'd got, which is quite nice. In years past I would use this for the Christmas Ham and Turkey, now it will be used for some other treats - a pack of that special local butter is top of my list.
Next year there will probably be a lot less in the tin as I seem to being using contact-less card payments more often now as it's so easy.

*with the ending of the Apostrophe  Preservation Society I feel free to put Apostrophes everywhere even when I have no idea if they should be there or not!!

Thank you for comments about Christmas stamps yesterday, with mixed opinions on designs. Sorry about not replying - a bit busy out with grandchildren.