End of Strange Week No. 1

I heard someone say "Keep smiling through" which is a line from from the famous WWII song "We'll meet again" and various reporters have mentioned "putting the country on a war footing" but all the Covid19 restrictions are much worse than back then. Although cinemas, football matches and theatres were initially closed/cancelled all reopened and restarted fairly quickly when it was realised that people needed somewhere to go and socialise. Wonder how long it will be before things are re-opened in 2020. Longer than in wartime I think and Suffolk libraries are the latest places to close.

It's not surprising that supermarkets have run short of stock. Very few have big stockrooms like they had in the past and they rely on regular deliveries at times set by how quickly stock usually goes off the shelves. So maybe the normal is one toilet roll delivery a week and of course if everyone suddenly buys loo rolls then the shelves will empty, it would be impossible to get a delivery earlier than the norm - hence the empty shelves.
As I said yesterday I've always kept well stocked food shelves due to Col using the one car we had and only shopping once a month and I remembered  back to our first years at the smallholding when the only places to shop were a small Somerfield and a Co-op and it was quite a common occurrence  for them to have an empty space with the one thing I'd run out of, so I got into the habit of buying double when it -whatever it was - was actually on the shelf. Once you are used to opening the cupboard and seeing it nicely full it's a difficult habit to change. Moving here and being widowed hasn't changed my preparedness - I'm a long way from a shop now.

This is the 3rd post in the first week about the Strange  Times but  back to the ordinary stuff and  the car was serviced and passed it's first MOT test - more expense but good news. I was thinking how ironic it is that diesel prices at the pumps are the lowest they've been for ages but there is nowhere open to drive to!

On Friday Youngest daughter had an important appointment and when the time was changed she asked if I could go over and take Florence to the final Ballet class before that too closed for the duration. Then home to stay in for the weekend.

I have a cunning plan for blog posts because when I went to Eye the week before last for the Weight Management thing, I stopped at the charity shop and found this, a quick flick through and it looks like every day of the year has a Saint. 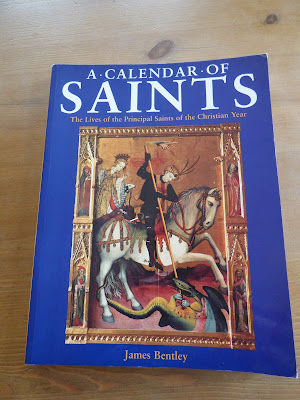 So that's my plan,  prepare yourself to find out more about forgotten Saints than you ever wanted to know!

And because of the book I found yesterday -20th - was St Cuthbert's day (some people might know why that's an important one for me😉) and today is the special day of St Nicholas von Flue who in 1481 was a hermit living in Switzerland and known as the wisest person in the country. He became a hermit after marrying and having 10 children!

Have the best weekend that you can, we've put off mothers day celebrations until this is all over. I'm not in the vulnerable groups It's only because being on my own I'd quite like to avoid catching anything if I can.

Back Monday
Sue
Posted by Sue in Suffolk at 07:00
Email ThisBlogThis!Share to TwitterShare to FacebookShare to Pinterest
Labels: Being Grateful, Saint's Days, STRANGE TIMES