Still Reading From My Shelves

Lacking library books and the horrible weather means that in the last few weeks I've rattled through several of the books that I had for Christmas. Lots of the lovely Dean Street Press/Furrowed Middlebrow reprints and almost all about WWII...................wish I knew why I find this period of history so interesting. 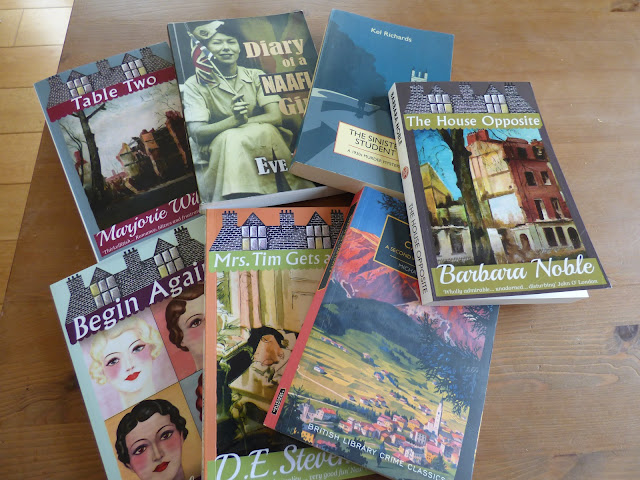 Marjorie Wilenski -  Table Two. Dean St Press/Furrowed Middlebrow Reprint. Set in the London office of the Ministry of Foreign Intelligence in WWII with the Blitz going on all around. Table Two is where the translators work, nine women - some old and bitter but independent and capable. When pretty newcomer Anne Shepley-Rice arrives she is befriended by the middle aged Elsie. Enjoyed this look at office life, reminded me of my early days in the old fashioned library.

Michael Gilbert - Death in Captivity; A Second World War Mystery. A British Library Crime Classic  from 1952. This is set in an Italian Prisoner-of-war camp for British Officers. A man is found dead in one of the escape tunnels, it's an impossible scenario and one of the Officers turns detective to find out who the spy is. This is set at almost the end of the war and finishes with the British Prisoners preparing to flee south towards the British invasion line as the Germans arrive to take over the camp. Another well written story - a different look at WWII.

Caroline Taggart - Christmas at War. Non Fiction -Published 2018. Memories of the food, presents, happiness and sadness of all the Christmases throughout the Second World War.From children in this country to prisoners of war. This is just short bits gathered together, interesting but similar to several other books of war time memories (forgot to add it to my photo)

D.E. Stevenson - Mrs Tim Gets a Job. First published in 1947. This author was extremely popular for many years and then nearly forgotten. The third in a series about Mrs Tim. Just after the war and Hester Christie's husband Tim is still overseas. With her daughter off to boarding school Hester is at a loose end until she gets a home and job with the formidable  Erica Clutterbuck who has opened a hotel in the Scottish Borders. I've read the first two in the series and this is just as good - very easy to read.

Kel Richards - The Sinister Student. 4th book by this author written in the last few years but as Golden Age crime and set in 1930's Oxford with C.S. Lewis and J.R.R. Tolkein. Apart from the main story this one goes into the realms of Sci-Fi with a Tardis appearing and a student coming back from the future to study the two dons - very odd. The author wrote 4 books featuring the same characters. This one is the strangest. I skipped bits when he is writing about C.S. Lewis' theological discussions.

Eve Diett - Diary of a NAAFI girl. This is a biography written in 2012. After being a Land Girl during WWII and then working in a hotel, Eve and her friend Marge start working in the NAAFI (Navy,Army,Air Force Institute) at a camp in Devon where new recruits for National Service are trained. Everyday was different as she served the young recruits and officers at the camp shop.
Something I knew nothing about so it was very interesting.


Barbara Noble - The House Opposite. Fiction. Another of the Dean Street Press/Furrowed Middlebrow collaboration. Actually written during WWII by someone who lived through the London Blitz.  Elizabeth is a secretary who has been having an affair with her married boss for the last 3 years. She has moved home to live with her parents during the Blitz.In the house opposite lives Owen, a teenager, waiting for call up to the RAF. Following their lives through  fire watching, sleepless nights, traveling across the damaged city, visiting relatives in the country and the end of the affair. A really good well written story.

My favourite was the last in my list, such a good story, feeling very real.


There was just one Furrowed Middlebrow reprint that I couldn't get into, embarrassingly it was the one Dean Street Press gifted to me. This was by Ursula Orange titled Begin Again. It's about 4 girls, all friends, just after they've finished university in the 1930's. Just couldn't enjoy it so I'm afraid I gave up after about 30 pages. The other two by this author that DSP have reprinted I really enjoyed. Oh well.

Just a few days left now until the library van is round. There are 8 books waiting for me to collect at the moment.


Back Tomorrow
Sue
Posted by Sue in Suffolk at 07:00
Email ThisBlogThis!Share to TwitterShare to FacebookShare to Pinterest
Labels: Book Reviews, My Books