The first serious effect of the virus has hit the family. The Surrey family find themselves both out of work - Son in Law was in a new job in a new start-up company and has been told that as he is at the end of his 3 month trial they no longer want him as they are not carrying on with the company until they know whats happening. Daughter went self-employed and freelance in the fashion industry last summer and that has all stopped. Talk about bad timing.......So suddenly no jobs and no income except the £94 Universal credit  they can claim and no savings having spent a lot on modernising and extending their old cottage a year ago. Oh My Goodness.
Youngest Daughter's job at the opticians has finished for the foreseeable future and her Other Half has also stopped work as he does ground-works on construction sites. Another self-employed person. Another family with no savings. It's such a worry.
Thankfully DiL is on Maternity leave benefits but might not have a job to return to later as she works for a big brewery, Archaeologist Son has been doing paperwork from home and should be covered by that government 80% thing.
Hopefully something will be announced to help the self-employed later today.

Eldest Daughter asked me to share tips for money saving to help everyone who finds themselves in the same situation with no income. I suppose it's true that for a long time early in our married life we lived on very little money so maybe the things learned then should be shared.


I think people with mortgages have been given a three month mortgage "holiday". Some of the other expenditure can't be stopped or changed straight away. But there are things you can work on immediately.

Over the next few days I'll try and list a few ideas.

Meanwhile..............................
BiL  had a weeks holiday off work this week and was planning to come and help me on Tuesday with  cutting some small wood ready for me to cut for kindling. I was going to cook dinner for us. Of course Monday's announcement put paid to that, unfortunately the news came  a couple of hours after I'd taken 1½ Gammon steaks out of the freezer, dug my last 4 leeks out of the ground to eat with the gammon and pulled a good bundle of rhubarb to make us rhubarb fool!

So the leeks were turned into soup and some portions put in the freezer, the rhubarb was turned into two crumbles and one put in the freezer and, because I only eat half at a time, I've got 3 days running of gammon steak - Much more meat than I usually eat.
I took a photo........ but thick leek and potato soup (I'll thin it down when I heat it up) is not exactly photogenic so I won't share it with you!

I went out to Post Office and Co-op food shop on Tuesday for fresh fruit which was my first outing for shopping for 6 days - I think this is allowed.
After all the fuss about people stacking their trolleys high over the last couple of weeks I didn't understand  when I heard on TV someone complaining that they had seen a person coming out of the supermarket with just a couple of things. Not sure how that was a problem perhaps they were leaving things for other people.

And I can now leave milk in the shops for other people because when an email from Approved Food popped up two weeks ago I looked to see if they had anything useful.......hadn't shopped with them for ages. They had nappies which I was able to give to Son and DiL for Willow and Arthur, another item which were disappearing from the shelves like crazy; sugar which was something I'd missed getting and these 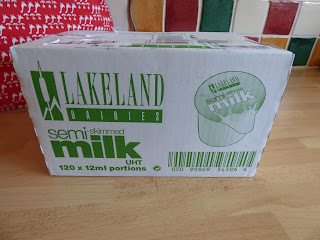 I also got a pack of 6 bags of Wotsits - but don't tell anyone!


Posted by Sue in Suffolk at 07:00
Email ThisBlogThis!Share to TwitterShare to FacebookShare to Pinterest
Labels: STRANGE TIMES