With the exceptionally wet weather we've had through the winter perhaps March, the first month of meteorological spring will be better  - it has to be- surely?.
Astronomically spring starts at the  Vernal equinox on the 20th.

Below is a March double page from Edith Holden's Diary of an Edwardian Lady . 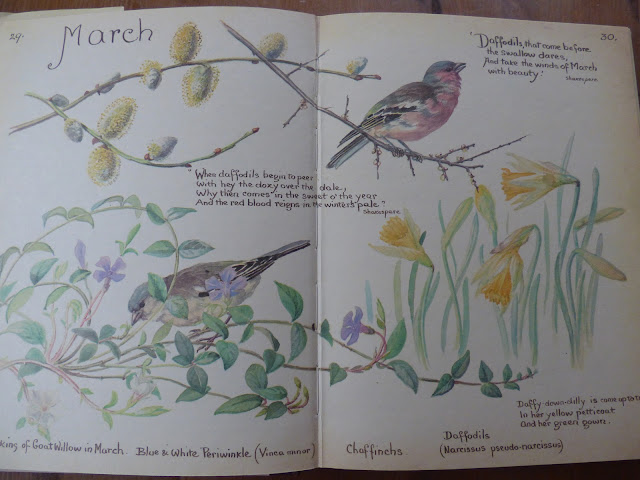 In the Roman calendar March,or Martius, was the first month of a new year. The month was named after Mars, the god of war and the guardian of agriculture. March was the month when both farming and warfare could begin again after winter.

The Saxons called it Lentmonat, or lengthening month, because of the equinox and lengthening of days and this is the origin of the word Lent. By the end of the month there will be two extra hours of daylight and we change clocks to BST on the 29th.

The March full moon on the 9th was known as the plough moon, wind moon or Lentern moon.

There are many other weather sayings,  the best known is

March winds and April showers
Bring forth May flowers.


I hope there is  a morning when, like Robert Browning we can say


The year's at the spring,
And day's at the morn;
Morning's at seven;
The hill-side's dew-pearl'd;
The lark's on the wing;
The snail's on the thorn;
God's in His heaven -
All's right with the world!


Back Tomorrow
Sue
Posted by Sue in Suffolk at 07:40
Email ThisBlogThis!Share to TwitterShare to FacebookShare to Pinterest
Labels: Folklore