On Saturday I arrived at the big Boot Sale at the same time as it started to pour with rain, so I turned round and went out again.....and so did everyone else.
Didn't even bother to try on Sunday as it was grey, chilly and very windy. Instead I baked scones and went out for a walk across the back field.

I have no idea if this video will work,  and because it was so windy you can't hear the skylarks that I could hear and most of my words were blown away too.

The footpath down my meadow and out onto the field isn't used much and mainly by local people, but if I'd done this walk just a while later I would have turned round and seen a large group of ramblers appearing - which would have been quite a surprise. I looked online and found they were Ipswich Ramblers group doing a nine mile walk in the area.

If we all have to stay at home and isolate ourselves at least I'll still be able to walk the path in the middle of nowhere.

Later I finished  this cross stitch, after it had been sitting half done in a drawer for about 2 years.  I've been right off stitching for all that time. 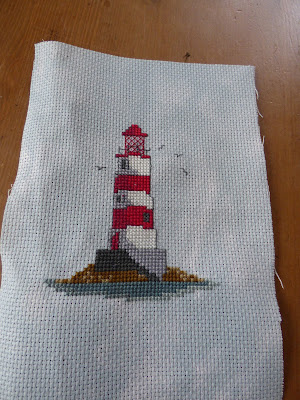 I used to stitch this design a lot when I was stitching to sell cards at the Country Market. It's quick and easy but looks quite effective especially when done on this marbled blue Aida. Just need to get it into a card blank......which mustn't take two years to do.

Posted by Sue in Suffolk at 07:00
Email ThisBlogThis!Share to TwitterShare to FacebookShare to Pinterest
Labels: Card Making, Cross Stitch, Walking