Rounding up the week and the month today.

Another mostly sunny week in Suffolk - no rain again so much watering has been needed and now the water butts need filling with the hosepipe .
This is a sunny sitting-out spot although it hasn't been really hot in my bit of Suffolk all week as the wind is East and quite breezy. 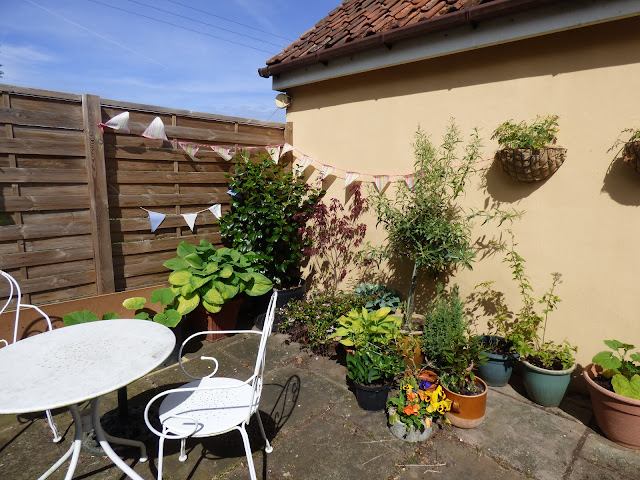 I've been half listening and watching the Dominic Cummings stuff all week - wondering what it feels like to be so hated by so many people, not just recently but for a long time and thinking what a idiot he is if he thought no one would notice and do I care anyway? I think it's all making me tired and lethargic.......that's how I've felt most of the week and it can't be because of working too hard!
More relevant  for bloggers is the latest change to the layout of stuff in the drafts pages bit - do wish Blogger would stop modernising. It's OK but takes longer - a bit like shopping! Speaking of shopping.......my initial thought about all shops opening in a few weeks was Oh Good. Then "but what do I actually need to go out and buy?.........Can I be bothered with all that queueing?" ..............On Tuesday I had to go and pick up a prescription and post a parcel both in a village 5 miles away and it took an hour - usually it would have been about 20 minutes. What a good thing I now have all the time in the world for everything!
I've been thinking about what will happen as we return to normal and get to see more people after all the isolation - being  reminded of what happened to many ancient tribes in Africa and South America when they were discovered by Europeans who brought with them things like common colds which then wiped out the native people as they had no resistance. Hope we haven't all been isolated so long that we've lost out immune system for ordinary ills!


Now a few frugal bits from May


3 good savings made this a low spend month

A very good saving on heating oil in the middle of the month when I ordered 600 litres for half the price of the 500 litres bought in January. The oil tank is now full and since then it's been warmer and the boiler hasn't switched itself on at all . The solar thermal panels on the roof have heated the water and the stored warmth from the conservatory has warmed the living room every evening.

The price of diesel is also at it's lowest for donkeys years so I've been keeping the car full. I put in the grand total of £13 worth this month..........compared to an average of £70 a month before Covid and price collapse.

The third saving was the car breakdown insurance - I rang to cancel to see what they would offer and got a years cover for the price of 9 months.

Food spending was just under average even though prices of fruit,vegetables and many other things are going up. The cat got food of course and the direct debits for phones, broadband, council tax and charity went out as usual plus there were two family birthdays in May and I've been buying the Saturday local paper which has the weeks TV listings and a double page of puzzles - giving me an extra choice of things to do.

My other spending was nearly all online, mostly secondhand - Games and puzzles and craft things for grandchildren (plus postage to send them)  also sent for a new pair of soft summer Earth Spirit shoes that I can wear sockless. Almost identical to my old tatty pair so I knew they would fit and be comfortable. ( I can't wear sandals comfortably due to needing an arch support). My old tatty pair have become summer gardening shoes. I'm never bothered about what clothes look like but shoes Have to be comfortable.

The only spending on gardening was a bag of multi-purpose compost and beetroot seed.

Looking ahead to June when the electric bill is due plus the window cleaner will be round sometime and there is one family birthday so as long as I stop looking on ebay/amazon it should be another low spend month.

Have a good weekend everyone
Back Monday
Sue

Posted by Sue in Suffolk at 07:00
Email ThisBlogThis!Share to TwitterShare to FacebookShare to Pinterest
Labels: Being Grateful, Frugal Month Notes