From The Nature Notes of an Edwardian Lady.

The name of this month is of doubtful origin. Ovid suggests the goddess Maia, the mother of Mercury. In the Roman Catholic Church May is known as the 'Month of Mary.'
Or perhaps from the word maiores (meaning Elders) as this was the month when the Romans celebrated the older members of their families

So many weather sayings for May, everyone desperate to know what the weather would be like during the main growing season.

Best known, although no one has ever decided for definite if it means May the month or may the flower of the hawthorn.

Ne'er cast a clout 'til May is out.

Most old sayings prefer a wet and cold month (hope it isn't!)

May damp and cool fills the barns and wine vats

Water in May is bread all the year

A cold May is kindly,
And fills the barn nicely.
A wet May
Makes a big load of hay.

In the middle of May comes the tail of the winter 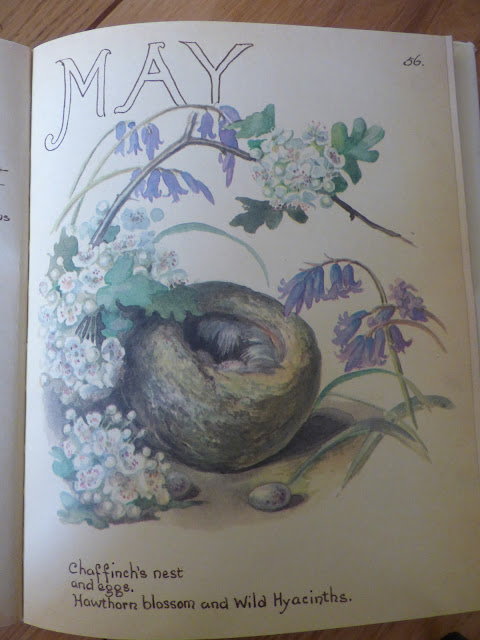 A Page from The Country Diary of an Edwardian Lady by Edith Holden.

For ancient Celtic people May 1st was Beltane( Bel's Fire). The first day of summer and bonfires were lit to help the sun regain it's strength. A day of feasting and in many places there are still traditional events on this day, involving dancing round maypoles, May Queens, Garland dancers and Morris men and hobby horses.
I don't know how many pubs in England are called The Maypole but in the village where I went to primary school there is a one and a very old building it is too...... circa 1530. The maypole in the middle of the front yard wasn't there until a few years ago.

This is my vase of flowers for the first week of May. The last of my tulips from the cutting garden and some invasive bluebells - not native. 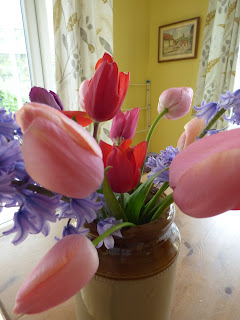 
Watch out for late frosts around the third week of May. These are attributed to Saint Dunstan (or St. Franklin in some versions). Apparently he made a pact with the devil in order to obtain good sales of his beer. In return for his soul the devil promised to attack the blossoms of the  apple trees in the orchards so that the cider makers would have less cider to sell.


Back Tomorrow
Sue
Posted by Sue in Suffolk at 07:00
Email ThisBlogThis!Share to TwitterShare to FacebookShare to Pinterest
Labels: Beltane, Cut Flower Bed, Flowers on the Table, Folklore