What a week of lovely weather we have had (well, here in Suffolk anyway). The sun has shone on most days and it's been really warm and when Santon Downham in  West Suffolk (on the sandy Brecks) reached the highest temperature in the country on Wednesday there was a good breeze here which kept it more comfortable. Just ten minutes of rain on Thursday night - could have done with much more.

This weeks flowers for the table were rose buds (complete with greenfly - discovered after putting my glasses on!) 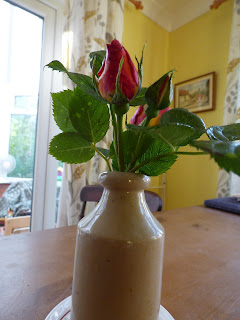 The quarter circle flower garden is full of aquilegia, some of which I'll try and dig out again when they finish flowering. Some very pale Irises in among the muddle. 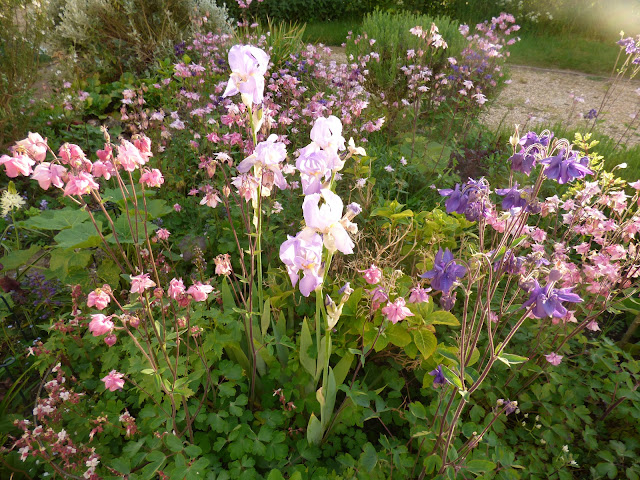 This - something - that I got from the boot sale last year has done well and getting bigger. I could look it up to see what it is but  there's no need as someone reading will tell me! 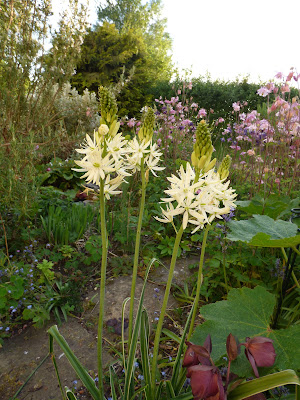 In amongst everything there are Forget-me-nots - which look lovely until they go over and make a mildewy mess - although they have shallow roots so easy to pull up - unlike the Aquilegia.

Around the corner in the flower bed by the conservatory I have these, a clump dug from BiL's garden last autumn. A bit like a Crocosmia  but purple? I know how they got into his garden because I dug some from a big clump we had at the smallholding and gave to MiL - which must have been 20+ years ago. The smallholding ones didn't survive the dry summers but they clung on at BiLs house even after all these years. 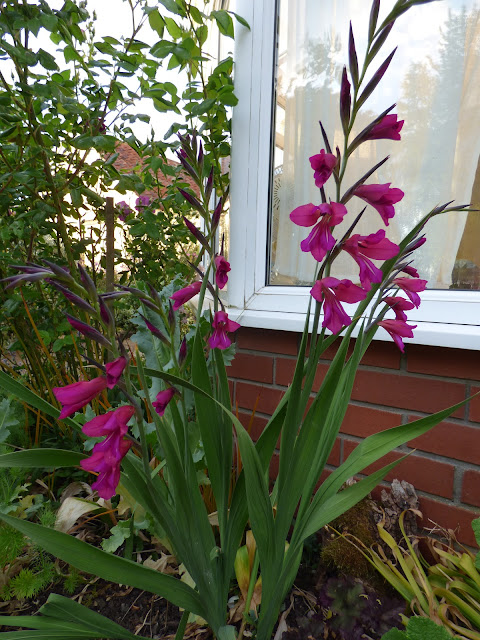 Well, I went shopping to Asda in Stowmarket. 9am and no socially distanced queue to get in so straight in, plenty on the shelves except SR Flour - but I got a bag of Bread Flour.
Went into the town centre to the Post Office which is also a newsagent and small convenience shop and found a bag of Self Raising flour there. So strange not to be doing a tour of the charity shops which I would usually do when  in Stowmarket.

I stopped feeding the birds this week because the only things on the feeders were magpies and starlings - starlings haven't been around much here until this year  and the magpies are nesting in the top of the poplars again........... such noisy bullies. And anyway I needed the heavy cast iron stand that the feeder pole was using for my parasol on the patio - it's original and proper use.

Today I'm delivering some courgette plants to Col's sister and calling in at the fruit and veg shop in Debenham on my way home for beetroot, they are one of the few places to sell bunched fresh beetroot........... can't stand those squidgy vacuum packs. I've sown more beetroot here in the LARGE gaps where my earlier seed didn't grow. Also popped a packet through the letterbox at BiL's house several weeks ago after speaking to him on the phone..........."Have you got room for another row of beetroot? "Why?" "Because whatever I do my beetroot seeds never germinate well" "Why?"  "If I knew that I'd be better at growing them, but have you got room to grow me a few?" "Spose so". Weeks later it looks as if every single seed from the packet he put in at his house have grown. So what the heck do I do wrong?
This is why Colin used to do the outside seed sowing and all my seed sowing is done in the greenhouse!

This week I am grateful for

Back Tomorrow with a quick extra post
Sue
Posted by Sue in Suffolk at 07:00
Email ThisBlogThis!Share to TwitterShare to FacebookShare to Pinterest
Labels: Being Grateful, Flowers on the Table, STRANGE TIMES