It really is Saturday again, even though it felt like Saturday yesterday,  funny how it comes around  quickly even when doing nothing.

Morrisons was my choice of shops for my fortnightly supermarket excursion. I'm loving driving at the moment, everywhere is so empty. Diss has one main road right through the town and it's usually a crawl through until the Morrisons roundabout, but now it's virtually empty - just drive straight in. I got to Morrisons just after 9 and there was no queue. Like everywhere else the flour shelves were empty but I'm still OK for flour, otherwise plenty of food for everyone.

Something very strange happened on Monday with my "Looking for a Cross Stitch Kit" post. It's so far got over 12,000!!!! page views. Normally each post gets between 700 and 1,500 depending on how boring it is. I'm not sure I believe 12,000 that's just silly, although the post from last month "A Little Bit of Stitching" also went mad with over 3,000 page views. Is stitch  or stitching some sort of code word?


Another strange thing happened overnight Wednesday. I went out onto the meadow Thursday morning and saw several of the plastic mesh barriers that Col made to go round the new trees were off the trees and laying in the middle of the footpath and the stakes that had held the plastic were broken and strewed all over the place. On closer inspection another couple of trees had been nibbled. So I reckon the culprit is a deer but this time one with antlers and as they put their head over the top of the plastic fence to get to the trees they got stuck and dragged the plastic off the trees with the wood stakes getting broken and dragged out of the ground too. Dear little Deer! Hooligans and vandals! Colin's Birthday wood has shrunk from the 40 we planted down to less than 20. High voltage electric fencing would be an answer! but perhaps not an idea for a meadow with a public footpath. 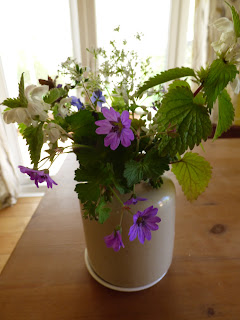 My 16 Brassica plug plants - 4 each of 4 different things-  arrived in the post on Thursday...............Just in time for heat followed by cold! So instead of planting them out I've done the equivalent of "heeling in" and popped them in some pots, covered the roots with soil, watered well, labelled them and stood them in a shady and sheltered spot where they will be OK  until one day next week.  Just waiting for the Melon plant now.

Yesterday I did the 6 mile bike ride around all the parts of the village to have a look at the bunting and flags, lots of people about and bunting and flags in several places. This village has the second largest acreage of all the villages in Suffolk so it's no wonder it's 6 miles around and even then it doesn't include two little bits.

This Hosta's looking good, it's outgrowing a huge pot so heavens' knows how I'm going to re-pot it into something bigger.. 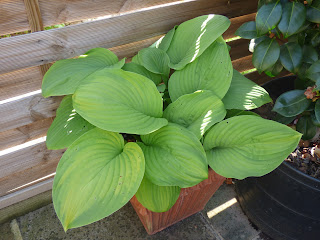 Don't forget to leave a comment on the Wednesday  1,000th post  if you would like to go in the draw for one of the 4 little giveaways. I'm doing the pull-a-name out-of-the-plastic-tub tonight and will let you know tomorrow who won.


Back Tomorrow with results of the draw for the little giveaways.
Sue

Posted by Sue in Suffolk at 07:00
Email ThisBlogThis!Share to TwitterShare to FacebookShare to Pinterest
Labels: Being Grateful, Colin's Birthday Wood, Flowers on the Table, Growing Food, STRANGE TIMES