In the 80's when I was a member of Bacton WI we always used to sing Jerusalem at the beginning of meetings and God Save the Queen at the end. When I went back 4 years ago they'd stopped and neither did we sing at the small WI I joined. So it was lovely to go to my own village WI this month and find they still sing both and it was 'allowed' again.

This months meeting was back to normal with a speaker - or actually two, they were Community Engagement Officers and I'd never heard of them! They are actually Police Officers whose job is to 'Engage with the Public'. Each area has one.

They go to events in their local area, speak to groups and our own PC regularly turns up at the Rural Coffee Caravan - for the cake and coffee he said! They advise about fraud and house protection and anything else people are worried about regarding their safety.

He said the difference between calling 101 and 999 was if you were worried about something that had happened or was actually happening at that moment. So if you hear someone in the neighbours garden when you know they are away then ring 999- just in case.
We lamented the lack of money that means we rarely see a Police Officer nowadays except rushing by with blue lights flashing. He said that was actually a good thing because the way they worked now was more targeted so if you didn't see a policeman it meant there were very few problems in your area.
They had some leaflets with information and gave out pens for marking possessions that show up with a UV light. 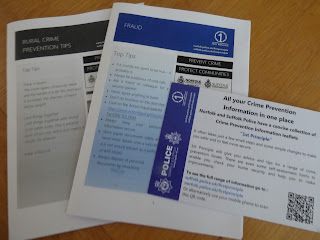 They often find stolen goods when they have to search a suspects home but usually can't return them to they're rightful owners because they don't know where they've come from.
They also said it wasn't just Line Of Duty where all the talk is in acronyms - they really do use them in real policing too.
It's really good to be able to walk there and back so I hope that WI carries on here after the AGM in November.
Back Tomorrow
Sue
Posted by Sue in Suffolk at 06:00
Email ThisBlogThis!Share to TwitterShare to FacebookShare to Pinterest
Labels: WI