I love my snow globes. One was bought as a Christmas present to myself the Christmas after Colin died and the other was picked up from a charity shop a couple of years ago.

The larger one has a wind up mechanism playing Jingle Bells with Santa going round on his sleigh and a tiny train that appears and disappears in and out of a tunnel, with glittery snow. 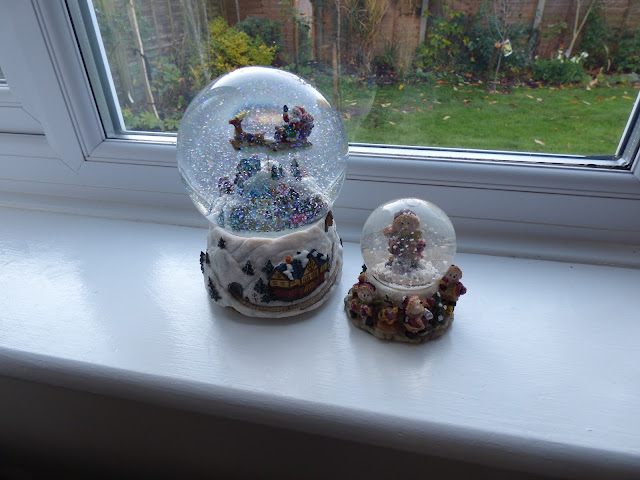 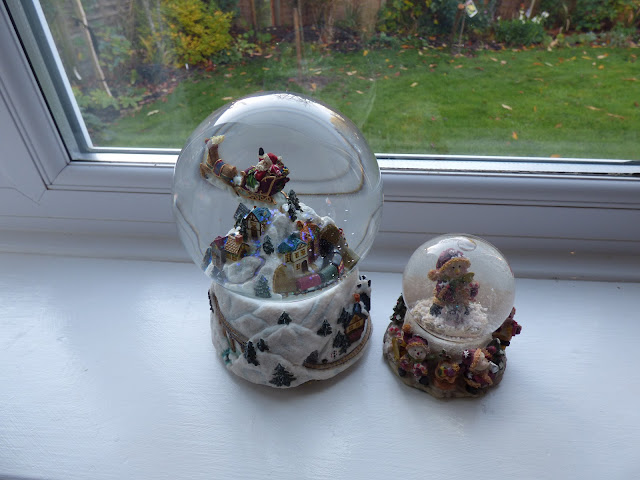 The smaller, older one is a snowman or a snow-lady, the snow flakes are white - not sure what they are made out of.

They are on the top of the low bookshelves now - out of the way of small fingers, although in a few years time I'll be able to keep them on the window sill to catch the sunlight.

I've searched through my Christmas books and there is no mention of snow globes in any of them. Not much history and on the t'internet it says ............

At the end of the 19th century the Austrian Erwin Perzy, a producer of surgical instruments, invented the so-called Schneekugel (snow globe) and got the first patent for it. Originally his goal was to develop an extra bright light source for use as a surgical lamp. As he tried to intensify the candlepower of a so-called Schusterkugel (a water filled flask used to focus light since the Middle Ages) with particles made out of different materials for reflection purpose, the effect reminded him of snowfall and it's said that by this he got the idea for a snow globe. He then built his first actual globe with the basilica of Mariazell as a model in it. Because of the great request for his snow globes, Perzy, along with his brother Ludwig opened a shop in Vienna, where the production continues until today as a family business. Today the globes get exported throughout the world; the material out of which the "snow" is made is handed down from generation to generation as a production secret (it should float as long as possible in the water before sinking down).

In the U.S the first snow globe-related patent was granted in 1927 to Joseph Garaja of Pittsburgh, Pennsylvania.

The original snow or "flitter" was made from bone or porcelain chips. The liquid is a mix of water, antifreeze (ethylene glycol), and glycerol. Glycerol is the additive that slows the descent of the snow.

Sometime in the long distant past I seem to remember having a small plastic globe and also trying to make one with water and sawdust in a jam jar - think that was a fail!