Saint Nicholas, whose day is celebrated in many countries today,  was bishop of the city of Myra in Asia Minor in the fourth century. The governor of the city took a bribe to condemn three innocent men and the executioner was just about to kill them when Nicholas stopped him and forced the governor to admit his guilt.
In the C6 the Emperor Justinian built a church in his honour in Constantinople and his shrine in Myra was a centre for pilgrimage until 1087 when Italian sailors stole his remains and took them to Bari in Southern Italy where another church for St Nicholas was built.
He became the patron Saint of sailors - hence this painting. St Nicholas Saving a Ship at Sea by Gentile Da Fabriano. Taken from my book about A Calendar of Saints. 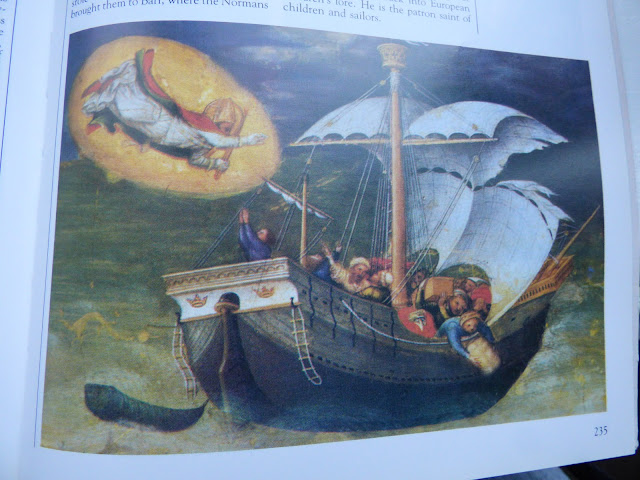 Saint Nicholas came from a very wealthy family and tradition says he gave away all the wealth he was left but prefered to do it by stealth - once throwing some money through a window and another time dropping a bag of gold down a chimney where it landed in a stocking (or a shoe).
This story was taken to the USA by Dutch Protestant settlers and by a corruption of his name became Santa Claus.
All through Europe in the Middle Ages December 6th was the day that churches elected a boy-bishop a custom that has carried on in many places. The boy would reign until the feast of the Holy Innocents on December 28th and Nicholas soon became the patron saint of children as well as sailors.
Back Tomorrow
Sue
Posted by Sue in Suffolk at 06:00
Email ThisBlogThis!Share to TwitterShare to FacebookShare to Pinterest
Labels: Advent Photos 2021, Saint's Days