Photos in Advent (sometimes called Blogmas) have been a "thing" on blogs for ages.(During the month of December rather than proper Advent)

Last year I wrote each day about a different Christmas book that I owned - most of those have gone now and in previous years it's just been photos of something connected to Christmas.

I had a big think, but no brainwave...... so it will just be all sorts of Christmas photos again, sometimes with a bit of history thrown in (people say they enjoy the folklore/special days posts - although they might just be being kind!)

Starting with the front door decor. I've not lived anywhere that people could actually see and walk past the door for ages but this year as I'm in the village and not at the end of a cul-de-sac  I decided to join in. 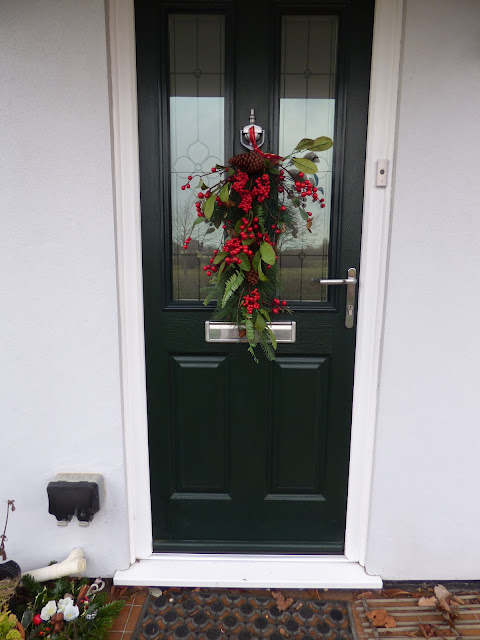 In this months Parish Magazine a lady was advertising her home made wreaths and other decorations which she makes through the year from donated bits and pieces and sells in December in aid of the local Scout Group. So I went to have a look and came home with two for £5 each - one for the door and another (on the ground on the left) which I'm going to put on Col's Mum and Dad's grave in Bacton where I'm also scattering some more of Col's ashes.(I didn't put all of them around the trees at Clay Cottage because I knew I'd be moving sometime and wanted to take a piece of him with me - which sounds odd - but then I am a bit odd!) The swag is all artificial bits and bobs and under the shelter of the porch so if I'm careful with storage it should be OK for next year too.

After hanging it up I trimmed a bit off the bottom to make it easier for the postman.........can't afford to upset a postman in the run-up to Christmas!

Back Tomorrow
Sue
Posted by Sue in Suffolk at 06:00
Email ThisBlogThis!Share to TwitterShare to FacebookShare to Pinterest
Labels: Advent Photos 2021