I'm not sure where September went but it's gone.

I've probably mentioned all the bits of weather folklore for October in previous years but here are three good ones.

Dry your barley in October,
Or you'll always be sober.
(Malted barley is the main ingredient of beer, which was drunk by everyone when water wasn't safe)
A good October and a good blast,
To blow the hog acorn and mast.
(Dating from the time when villagers were allowed to turn their pigs into the woods to feed on acorns and Beech mast - called Pannage)
In October manure your field
And your land it's wealth  shall yield
(Best time for muck spreading, before the fields get too wet,  ready to sow crops in the spring)

The October plate has been out before because it was one I found at a boot sale in 2021 before finding the whole set at the beginning of this year. 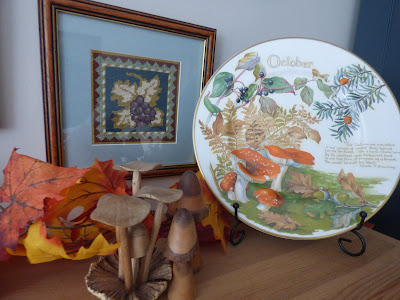 Below is a lovely illustration of  Kestrel from a print from my book  "A Sparrow's Life as Sweet as Ours" by Carrie Akroyd. It's in the Autumn section of the book but Kestrels are around all year and very common. I think seen more often now than when I was little when we would get quite excited to see one hovering. In some parts of the country they are  known as "windhovers". Now they can be spotted on almost any walk or drive.  In the book it says their skill at hovering was tested and it was found they could hold their position within a centimetre for 28 seconds. They spot their prey - mainly mice and voles - because of being able to see the wavelength of ultraviolet and trace their urine trails. 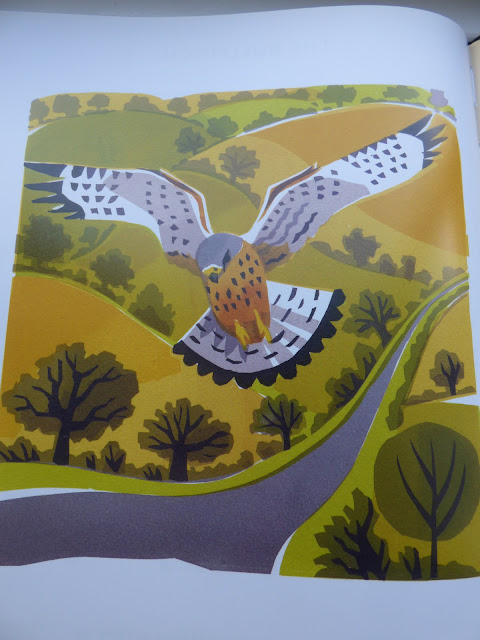 Also according to the book, numbers of Kestrels have dropped since 1970 because of the use of poison for vermin and the decrease of rough pasture.

The October Parish Magazine arrived and I was interested to see the History Group is starting again. I found a phone number to ring when I moved here in May last year and the lady said she wasn't sure when the group would be re-starting after covid, the time has finally come. Then I noticed the date and it's on the 3rd Wednesday of the month and WI is on the 3rd Tuesday. The question is...........can I manage two consecutive evenings out? One evening a fortnight is usually my limit! It sounds interesting as the speaker is talking about Landguard Fort in Felixstowe which is a place I've not been too since it was  sorted out and opened to the public fairly recently......... and I know  someone who volunteers there.

October 2022 here will probably be forever know as the month of "having the builders in". I'm glad that I can shut the living room door and they've been good at keeping the bedroom door closed too, which has made it quieter. Plus they can put the materials, tools etc in and out of the bedroom window, which has saved having the front door open so much.