The red pointy peppers  did really well this year and the orange block shape were good too. All sliced and into the freezer now. I don't blanche them but always use stir-fried or cooked - haven't been ill yet - touch wood!

This is my very last one, I've given up waiting for it to turn red now the weather has got colder. 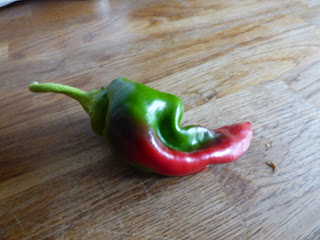 And of course had to look up the history in my little book " A Potted History of Vegetables". 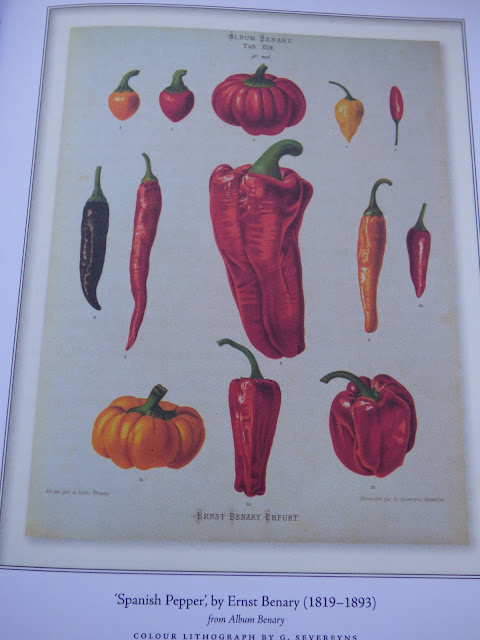 Peppers were never used in the home kitchen of my childhood and I'm not sure they were widely available  until the 70's but they are thought to have been first harvested from the wild around 10,000 years ago in South and Central America. By about 3,300 BC it was being cultivated and arrived in Europe in the 16C. Now it's vital in many recipes around the world.
I didn't start growing them until we were at the smallholding and growing for sale and also had a couple of years of growing many different sorts to sell the plants at the Suffolk Smallholders Show.
Nowadays I only grow sweet peppers and the red pointed are my favourite, but they are available in a wide variety of shapes, colours and sizes although brown or white don't appeal to me at all but purple would make a good addition.
As I only use the hot chilli peppers in chutney it's cheaper to just buy a pack now rather than grow them.  I noticed in the new seed catalogue from Kings Seeds there are a couple of varieties that are listed as Chillies but with no heat and another that can be sown and grown all year round on a windowsill, producing tiny fiery fruit for about 3 months.
Back Soon
Sue
Posted by Sue in Suffolk at 06:00
Email ThisBlogThis!Share to TwitterShare to FacebookShare to Pinterest
Labels: Peppers