Saturday morning and one coat of emulsion on the last wall, then another and then the second coat on the coving. Colin replaced a single plug with a double and swapped one of the double wall lights to the other side of the room. Then I could clear away all the dust sheets that we've been moving around and living around for a week.
The final bit on Sunday was me doing the bum shuffle round the floor again putting down masking tape and painting the skirting boards, and while I had the satin wood paint out I remembered to do the boiler cupboard door. Thanks to the person who suggested a small foam roller to paint the door - it worked a treat.

Curtain poles went back up and the big mirror. We still have pictures to hang when I can work out which to keep. Now I can buy another set of book shelves and the last box of books can finally be unpacked. Most of our books are upstairs, away from the dust of the wood-burner, but I'd like reference books downstairs.
I've spotted some Dunelm curtains online that I like but really want to see them in real life before  ordering so we'll need to go that way round Ipswich when we are at hospital or when I'm at the dentist (Aaaaaaaggghhhhh....Fillings.........Terrified!) during the week.

I listened and watched some of the bidding on-line from Saturday's bygones sale. The most amazing lot was a box of things that included a handbell. I'd actually circled it in the catalogue to look at when we went on Friday because I quite fancy a little handbell. There didn't seem much else of interest in the box............but obviously someone knew something we didn't as this small box of odds and ends guided at £20 - £40 went for............£470!!! Whatever was it that pushed up the price? We wondered if what looked like a letter opener was a piece of Chinese weaponry of some sort.......but £470! Heck.
(By the way our 3 boxes sold for total of £25 but then take off sales fee and there's not a lot left!)

Sunday before painting we nipped to the local car boot sale and I spent the grand total of 20p on this sheet of foiled decoupage which will make two cards. 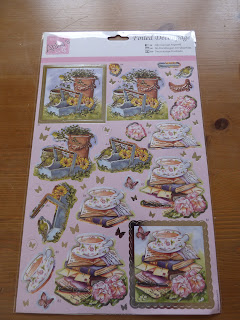 Not really worth going anymore as most of the people there were the same as every other week we've been.

The lads came back on Sunday afternoon to finish the garage roof and just need to track down 60 more tiles, clear up and then the scaffolding can come down.

We've got an in and out week ahead. Dentist, hospital, babysitting and Colin will be helping his sister and brother with funeral arrangements as their Dad passed away in hospital last week. I've not mentioned it on here before as it wasn't appropriate to do so but quite suddenly in May not long after his 86th birthday he started to get confused. He had been living with and having treatment for a brain tumour for many years, and with arthritis for even longer but suddenly he started falling, didn't know where he was and couldn't live at home anymore so spent a couple of weeks in hospital then a few more weeks in a care home then back into hospital for a week where he slept peacefully until the end. Col's sister stayed with him to the end and it really was a peaceful passing. So a funeral to arrange and all sorts of paperwork to be sorted. The funeral will be at the Methodist chapel where he worshiped all his life and he will be buried in the village beside Col's lovely late Mum. As a Lay Preacher on the Methodist circuit he was very well known and had lived in the same house most of his life so was well known in the villages too. The funeral will be later this month and chapel will be packed.

This, from Ecclesiastes,was what I choose to be read at both my Mum and Dad's funerals.  I don't know if it will be read at Dad-in-Laws funeral  but it always seems appropriate......everything passes.

To every thing there is a season, and a time for every purpose under the heaven:

Posted by Sue in Suffolk at 07:10
Email ThisBlogThis!Share to TwitterShare to FacebookShare to Pinterest
Labels: Family, The Cottage.

Sue in Suffolk
Not many years beyond 60 and proud of being Suffolk born and bred! After 38 years of happy marriage .....with 23 of those years spent on a self-sufficient smallholding....my dear husband Colin was diagnosed with Mantle Cell Non-Hodgkin Lymphoma and died in May 2018. Our 3 grown up children have given me 3 wonderful grandchildren......so far. I live in a cottage at the end of a lane in Mid Suffolk and hope to stay here in the peace and quiet until I get too decrepit to drive!