I missed June's W.I. meeting but got to July's which was all about the birds, butterflies and plants around RSPB Minsmere
The speaker was a man who takes guided walks all around the area and had fantastic slides........ most were photographs he had taken himself.
Given that we lived just a few miles from Minsmere and the Suffolk Coast and Heaths for 23 years I recognised most of the places he had photographed.
He said "this is an interactive talk" and put up photo's of birds and plants and asked if anyone knew what they were and rather than have a long silence I usually piped up with an answer and got some right. At the end, one of the ladies asked me how I knew so many birds and plants and I guess it's because of always living in the countryside and being interested in what's going on.
From the age of 5 to 11 we walked to school down a quiet road (wouldn't want to walk it now - too busy) and always picked any flowers that we saw and took them into school where we could look up the names in a book, write a label and then put them on the "Nature Table". Nowadays I still look up things I don't know .

Our representative who attended the Annual Meeting in Liverpool reported back on the resolutions and we had a feast of cakes and savouries as usual.
Next month there is no meeting as it's a theatre trip instead. This is something that I find a bit annoying because for people who are at work, don't want to go or can't afford the £11( this time) for a theatre ticket it means that WI membership isn't as inclusive as it should be - one less meeting for our fee - if you see what I mean. I think trips out that cost extra shouldn't be instead of the meeting but extra to the meeting.


Anyway getting away from the politics of the WI, we went back across the field and down the old railway track bed to the cherry plum tree and came home with several pounds of plums. We were only just in time as several had been damaged by birds already. 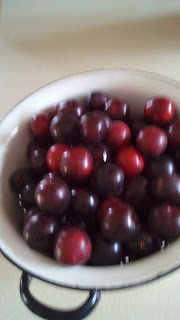 The problem with these is that the stone doesn't separate from the plum very well which means they are not good for jam making.
We sorted through, kept some for eating fresh, cooked up the rest and divided them into portions for the freezer.


Here's a dull photo of a tray of breadcrumbs! Which was another thing I did yesterday. It was my turn to take something for refreshments for W.I.  I made egg and cress  mayo sandwiches (and scones, jam and cream) and cut off the crusts, I turned all the crusts into crumbs and dried them out in the oven when cooking dinner. They get popped in the freezer and used to top pasta bakes. 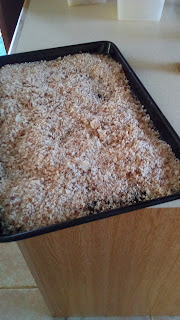 Thank you for comments and apologies for not replying and not leaving comments elsewhere. I'm trying to cut down on lap-top time and scheduling posts for the next morning so that I don't pick up the computer until late in the day.......in theory!


Back in a mo
Sue
Posted by Sue in Suffolk at 06:00
Email ThisBlogThis!Share to TwitterShare to FacebookShare to Pinterest
Labels: Natural world, WI