Mid June we spotted these pretty little purple/pink flowers down in the long grass of the meadow. They are pinker than the photo shows and I've made it a bit blurry too - hopeless photographer! 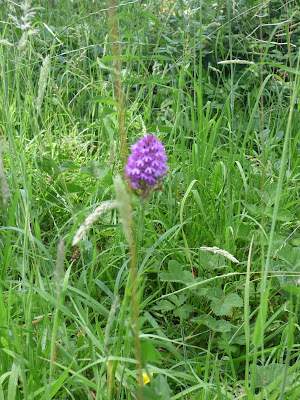 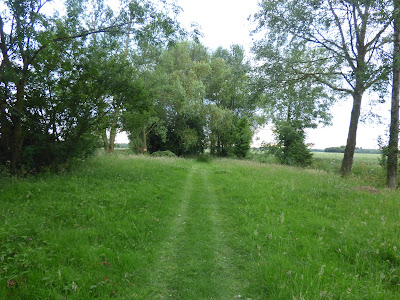 We've only cut the footpath bit and left the rest to see what came up. This is where we'll be planting trees in the Autumn.

We looked on line and found THIS PAGE   with all the native British Orchids and I guess ours is the Pyramidal Orchid. Quite common throughout Britain but still a treat to see here.

Yesterday was Day 2 of sanding down, filling and painting while watching Wimbledon. The living room is big so I'm having to do it in bits. I've gone for a bright yellow silk finish .........perhaps a tad too bright? I'm not sure about it but anything has to be better than the very dirty, dark, matt finish yellow that sapped all the light out of the room. Colin has started replacing the downstairs loo which sounds straightforward but wasn't due to age of old loo, amount of concrete used and the way the drains go, which is why he didn't get it finished in one day.
The garage roof is getting sorted by two young blokes who are doing it between their proper work which, at the moment, is restoring an old bungalow about a mile away. Two other young guys came and put up scaffolding and had a huge industrial radio playing and of course the first thing the builder blokes took up to the roof was a similar giant music machine. When I eventually get builders to make an en-suite in the corner of the bedroom I think the first thing I'll ask is "do you play loud music?" If they say yes I'll find someone else!
Yesterday we  exchanged our huge ride on mower which we bought off Mrs F, for something a bit smaller that I can use. The big one was complicated too and I need something simple.
We are trying to get as many jobs finished as we can because when Col goes into Addenbrookes hospital for the donor stem-cell replacement ( now probably mid to late August/early September) he will be there for up to 6 weeks and we don't know how he'll be afterwards.

Thanks for your comments on the last few posts.

Posted by Sue in Suffolk at 06:30
Email ThisBlogThis!Share to TwitterShare to FacebookShare to Pinterest
Labels: Colin's Birthday Wood, Natural world