Back to My Own Bookshelves

What a cold weekend we've just had here, perfect for staying in with a book and the Winter Olympics, Shoot-out Snooker and 6 Nations Rugby on TV. Since Thursday night  I've been fighting off a "bug" that finally turned into sore throat,ear ache and feeling pretty rough. Luckily  I survived long enough to get us to hospital clinic on Friday and for me to go to  the Potato Day on Saturday morning (more about that later in the week) but since then it's been minimum work of getting wood in for the wood-burner, cleaning out the fire and easy food prepping.( A lot of sandwiches and toast!) and washing up. Luckily Col is beginning to pick up a little energy and has been able to help with keeping the fire alight, making a cuppa  and a bit of wiping up the crockery. I haven't had any sort of lurgy for ages........a year or more so I'm a bit cheesed off!

Getting back to the subject...................January's collection of library books didn't last me for the whole month because, after flicking through them, there were several I didn't fancy, so ended up just reading 5 out of the 9  brought home. 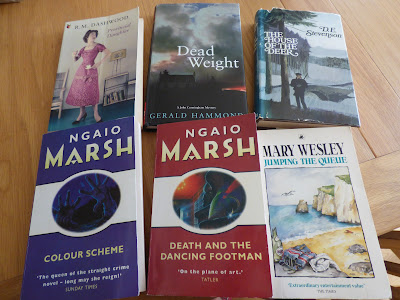 Top left......................R.M. Dashwood - Provincial Daughter
Written in the style of and by the daughter of E.M. Delafield who wrote the very entertaining "Diary of a Provincial Lady". This was OK but not as good as her mothers work.
Top centre .............Gerald Hammond - Dead Weight
A Prolific author who turned out lots of crime books set in Scotland in two series during the 80's and 90's. This one is from the gun-dog training series set around the kennels where dogs are bred and trained.
Top Right.................. D.E. Stevenson - The House of the Deer. Another prolific author who wrote through the 1930's to the 1970's. Also set in Scotland this is one of her later novels (1970) and is not much more than a romance. Persephone reprinted her earlier Miss Buncle books - don't think they will be reprinting this one!
Bottom Right............Mary Wesley - Jumping the Queue. Her first novel for adults published in 1983 when she was aged 70.
The Fantastic Fiction website describes it thus.....Recently widowed, Matilda Poliport's meticulously planned bid for graceful oblivion is foiled. Later she foils the suicide attempt of another lost soul, Hugh, on the run from the police, and life begins again for them both. But life also throws up nasty secrets and awkward questions, both from Matilda's past and her present.
An odd little story with no happy ending.
The other two books pictured by Ngaio Marsh were written in  1940's. A huge Crime series  featuring her detective Roderick Alleyn. I had a set of 7 re-prints of the early novels from Book People a few years back and have now worked my way through them.  I've got the next 3 in an omnibus edition from the library here to read and the rest will be borrowed from the library sometime in the future.

The mobile is round again on Thursday, bringing me 7 books I've requested. It won't be bringing me the new Elly Griffiths because I only just realised it had been published and remembered  to add myself to the library waiting list and found I'm 338th !! That must be the longest waiting list in the whole history of Suffolk Libraries! They have got 90 copies on order but even so it will be a while before it's my turn. Thankfully I've never seen the need to rush out and buy new books and I'm quite happy to wait my turn.
I'm also waiting my turn for 17 others including one that has popped up on several blogs......"Home Economics- How to Eat Like a King on a Budget" by Jane Ashley. I'm afraid I can't justify spending £10 to buy,  so I'll borrow it..... 2nd on the waiting list............ and see what it's like and then if it's worth having it will be on Amazon secondhand and much cheaper in a while although I'm guessing most of the recipes have already been on her Eat Not Spend website. Actually looking at her website it's plain to see just how much food prices have shot up in the last year. No way is butter now 89p.

I loved all the comments about Spam and Ye Olde Oak Ham for Sunday teas......thank you to everyone for joining in with memories.