What's in a Name

The other day I had a comment from a 'Colin in Kent' who said he hadn't commented before and it got me to pondering on how few people I know called Colin.

There were none in primary school but we did have some other names I've rarely heard since.........like Melvin and Neville and Roderick.

When I got to Grammar school there was only one  Colin who was in my form right through the 5 years and I'm sure his middle name was also the same as my Col. I was "madly in love" with that Colin- as you are at age 11 and 12 ......and 13. Goodness knows why, as I think he found me totally annoying and I remember him being very rude about me in my hearing. I also remember getting to sit in the desk right in front of him one year......which was tremendously exciting! I left school after O levels in 1971 but he stayed on for A levels.
When we had our school reunion in 1988 and I was trying to track down addresses for the 90 people in our year who were by then spread far and wide,  I managed to find his address from his parents who still lived in the same place, by then he was deputy head of a primary school on the Suffolk/Essex border but sadly he didn't come to the reunion.  At sometime in the 90's I saw on the now defunct Friends Re-united site that he was teaching in Dubai. No idea where he is now although he has a Facebook page that he doesn't use..................I'm not stalking him.......honestly! 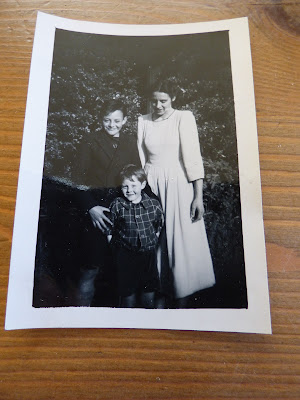 This photo is the only one I have of a little Colin, it says on the back June 1949, also on the photo is my mum aged 23 and  my uncle who died last year.


As for my name......Susan.........we are just so common! There were 5 Susans out of the 45 girls in our year at Grammar School. There were at least 3 who were mums of  other children when our lot were at primary school and now there are many blogging Sues too. My Mum always said she wanted to call me Jane but was persuaded not to by my Gran.........who said " Oh No Not Plain Jane"..............I don't know many Janes anywhere.........would have been much more interesting!

Thank you for comments about the "vintage kitchenalia". It's rare to find anything similar in a charity shop nowadays...........think it's all on ebay.
Welcome to another follower.....guess what.....another Susan!


Posted by Sue in Suffolk at 06:00
Email ThisBlogThis!Share to TwitterShare to FacebookShare to Pinterest
Labels: Memories