The 22nd year of THIS EVENT and several of them at this venue which we now live closer to than ever before. (It's where I go for the Sunday Car boot sales in summer). It's run annually by Norfolk Organic Group, Suffolk Organic Gardeners and Ipswich Organic Gardeners Group.
There's a lot of queueing up to get in and I've waited in snow and rain and bitter winds - it's rarely warm in Mid February. Last Saturday was Freezing and but dry enough. I arrived ¼ of an hour before the doors opened and reckon I was about 50th in the queue! 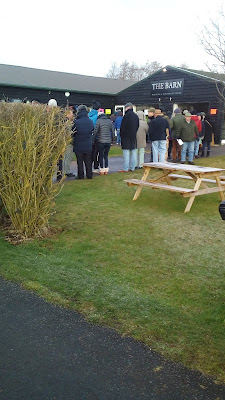 There are lots of other organisations running stands there and it costs £1.50 to get in but by picking up a free shopping bag from the District Council Re-cycling stall........ 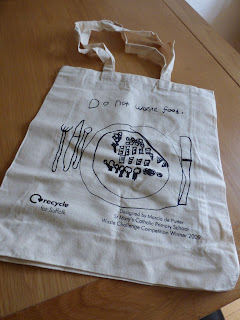 I reckon that covers the entry charge. (Bit peeved that they only had cloth bags this year, every year previously I've had a sturdy jute bag). Inside the 80 varieties of potatoes are laid out in labelled boxes in alphabetical order and cost 17p each. They provide paper bags to put the potatoes in and pens to write what you've got. .

Before I went I checked the website to see what types they had available this year and  I decided to mix in a few  older varieties. Last year we just had First Early Foremost and Second Early Charlotte.........10 of each I think, they were what we grew at the smallholding to sell. But neither were very outstanding taste-wise  here........the soil is different I guess, and we seem to catch more rain here than where we were by the coast. This year we have a bit more room than last year to grow.

I got 5 (enough for one row across a veg.bed) of each of First Early ...Home Guard and Swift, Second Early........Charlotte and Nadine and Maincrop.....King Edward and Majestic. Total cost £5.10. All I have to do is remember to write down a note of the rows when they are planted and it will be a good taste trial. 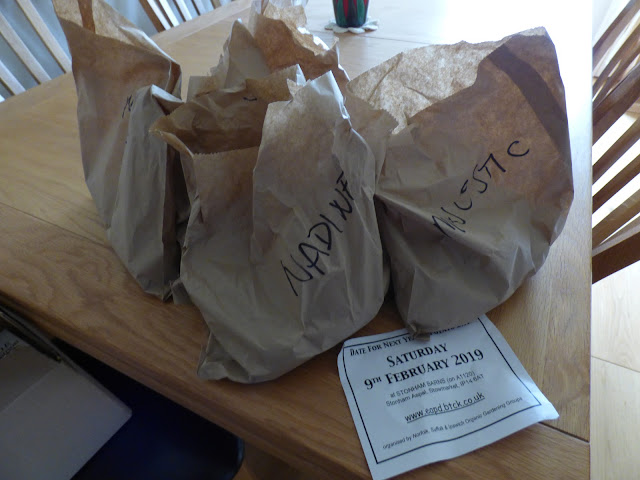 They make sure to hand out notes for next years date of course.

I need to get the early spuds on trays to chit (produce short shoots) The dining room table should be the best place for them........steady temperature and light.Nice sturdy shoots are what's needed...........and then roll on spring for getting them planted. We're going to need quite a lot of fine and warm weather to dry out the veg beds this year. 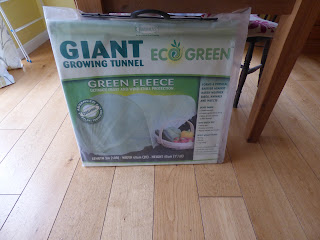 Posted by Sue in Suffolk at 06:00
Email ThisBlogThis!Share to TwitterShare to FacebookShare to Pinterest
Labels: Local Events, Potatoes