When you have chemo and nasty tablets forced upon you, one of the side effects is loss of taste-buds or things tasting weird and a dry, sometimes sore mouth.

So when Col said "I fancy Spam Fritters" I wasn't going to argue. 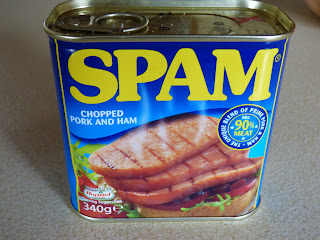 Spam is funny stuff, not something we had much when I was small as far as I can remember although we regularly had other tinned meats like luncheon meat and Ye Olde Oak Ham in it's unusual shaped tin, which was always part of Sunday tea if Aunties, Uncles and cousins came round.

Spam first came to this country from the USA during World War II.

History Spam was introduced by Hormel in 1937. The Oxford Encyclopedia of Food and Drink in America states that the product was intended to increase the sale of pork shoulder which was not a very popular cut. Ken Daigneau, brother of a company executive, won a $100 prize that year in a competition to name the new item. Hormel claims that the meaning of the name "is known by only a small circle of former Hormel Foods executives", but popular beliefs are that the name is an abbreviation of "spiced ham",

According to various wartime books it was a very different product to what we see now, with a layer of fat around the outside - just as I remember corned beef once having about 30 years ago.

Beginning in 1940, Spam sponsored George Burns and Gracie Allen on their radio program. During WWII, Spam was not only eaten but was also incorporated into many other aspects of the war; it was so prominent that Uncle Sam was nicknamed "Uncle Spam". Other terms influenced by the product’s name include the European invasion fleet, or the "Spam Fleet". Furthermore, the United Service Organizations toured the "Spam Circuit". In the United States in the aftermath of World War II, a troupe of former servicewomen was assembled by Hormel Foods to promote Spam from coast to coast. The group was known as the Hormel Girls and associated the food with being patriotic. In 1948, two years after its formation, the troupe had grown to 60 women with 16 forming an orchestra. The show went on to become a radio program where the main selling point was Spam. The Hormel Girls were disbanded in 1953.


From the above I'd sum that up as fatty and salty!

A big tin of Spam - 340g is £2, so 58.8p per 100g. It's not something that will ever feature regularly on our menu but  a tin sitting in the cupboard is a useful standby. If it's popped in the fridge for several hours before opening it can be sliced very thin and will do fritters and a couple of days for lunch sandwiches.

BTW I was Never a fan of Monty Python and the spam with everything sketch makes me feel quite ill!

Back Monday
Sue
Posted by Sue in Suffolk at 06:00
Email ThisBlogThis!Share to TwitterShare to FacebookShare to Pinterest
Labels: Thrifty Lifestyle