How did it happen?
Because of a car boot sale of course!

I had to go food shopping so went early to do a quick tour of the boots, although I found I was feeling a bit rough so didn't get right round. Just far enough to find this 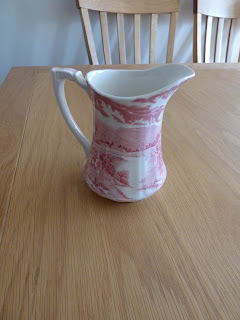 Alfred Meakin "Tintern" for £1. Tintern Abbey is tiny but just visible in the picture. I think it dates from around the 1930's although it might be later. It's got a teeny chip on the base but still looks good.

After the boot sale a short dash round Tesco's and home to rest. I've had the ears checked by nurse practitioner and she said no infection just a virus that's going round - like a head cold but bunging up the ears rather than nose (sorry - too much information!). Apparently quite slow to get better - Oh great joy!  So annoying to feel grotty on the sunniest and warmest day for ages, I could have been out in the greenhouse. Oh well, plenty of time left to sow seeds.After we moved here last year I didn't get started  until the middle of March and we still had things to eat through the summer.

Thanks for comments about finances and feeding the poorly husband.