I thought it would be interesting to look back via the blog to see what we were doing in early February over the last few years.................. it turned into a very long blog post!

Looking all the way back to 2014 on the smallholding, working hard and no inkling of what lay ahead.

You know how some days you can be busy without seeming to achieve much, well today I was busy and I can actually see what I've done.

The day started with my usual walk around the field to let out the chickens from their 3 different sheds, check they are all still upright and collect the eggs. Then a basket of washing was hung out good and early with sunshine and a drying wind forecast.
Next job was to get two loaves of bread started and rising in front of the Rayburn.
After a cuppa, I pricked out the next batch of seedlings comprising of a few of each of three types of tomato and a few peppers. Then the small seed trays were refilled with seed compost and some more tomatoes sown and popped into the windowsill propagator.
Then I got a shout to go over and help put the plastic over the small poly-tunnel at our neighbours. Him outside has now finished the job, the boat has been wheeled inside and our neighbour is very pleased.
I had a tidy up in the shed and then a tidy up indoors.
The postman  brought me some books that I'd ordered using my Christmas money. "5 acres and a dream" and "Skeoch - our new life on a Scottish Hill farm". Both look like a good read and both are by people who write blogs.
The bread was baked and turned out well.
The washing dried.
I covered two lots of rhubarb with bottomless dustbins to get them going.
Leeks done for fritters to go with bacon chops for dinner.

But the best job of all, which will make such a difference, is that after 4 dry days with drying wind Him Outside managed to get the middle sized chicken shed moved away from the sea of mud onto fresh grass - AT LAST! 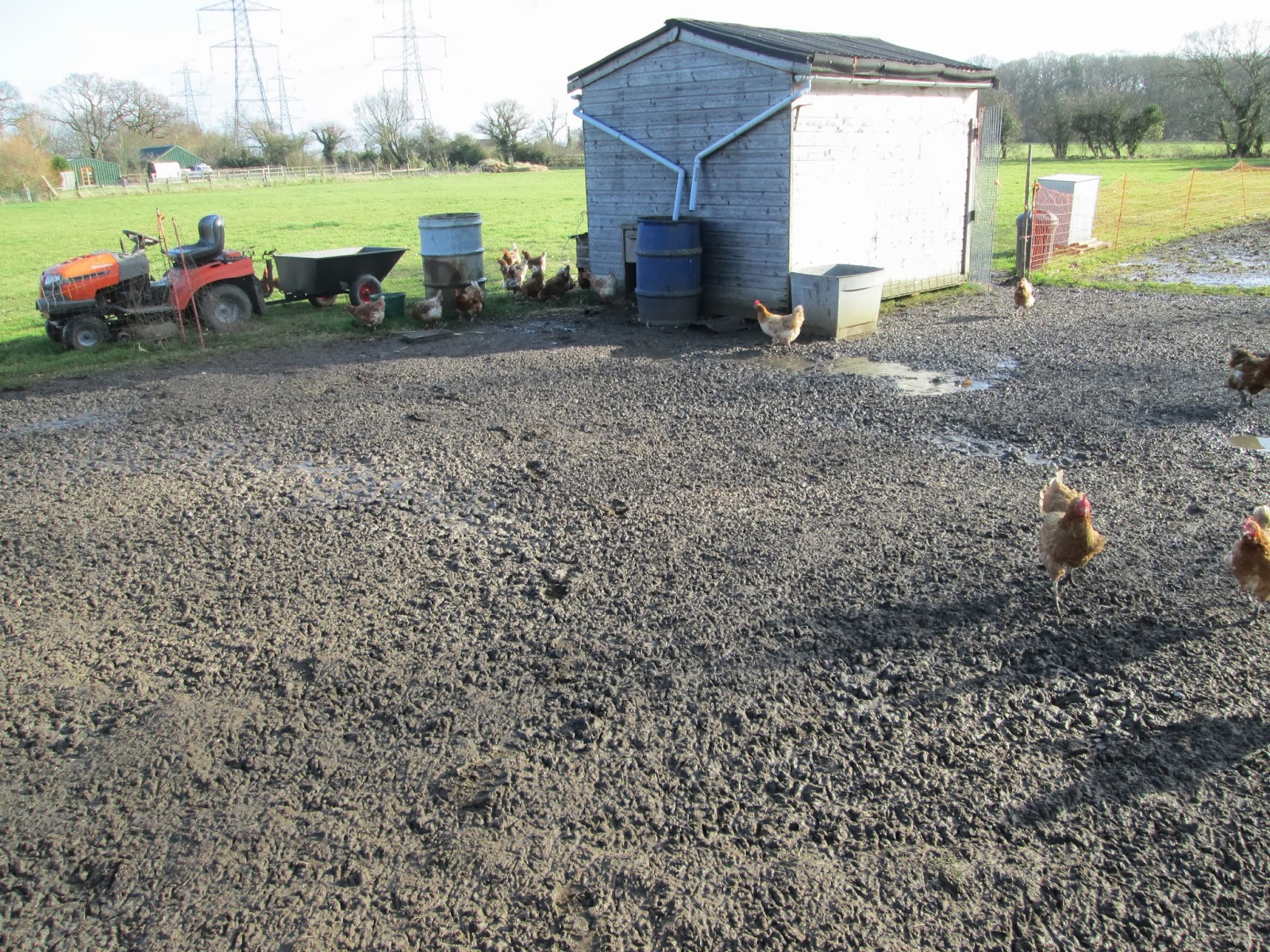 So many weeks of rain had turned more than half of their run into  a sticky mud mess. 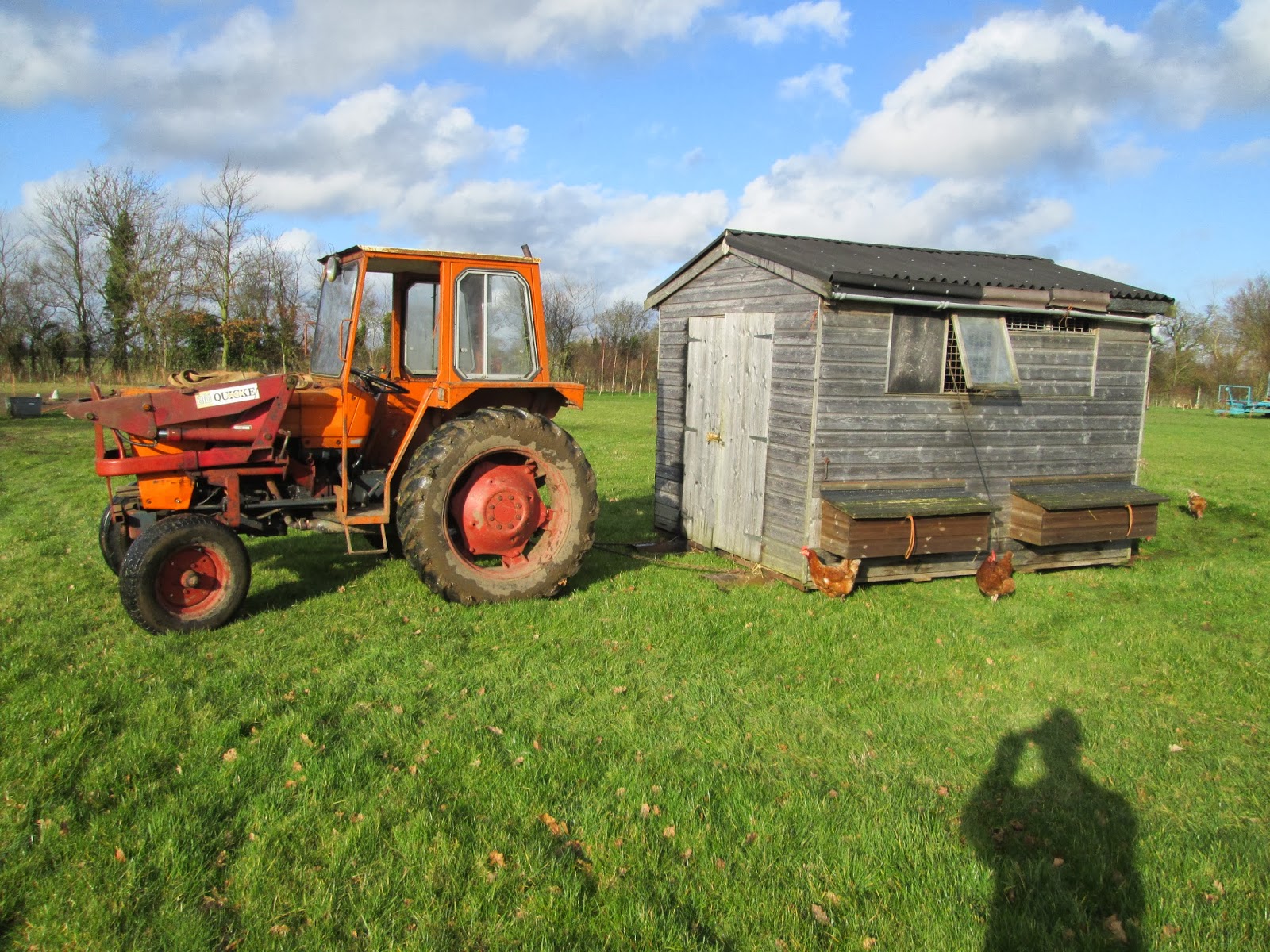 The shed is on 2 wide metal skids, with a chain attached, they can be moved with the tractor. 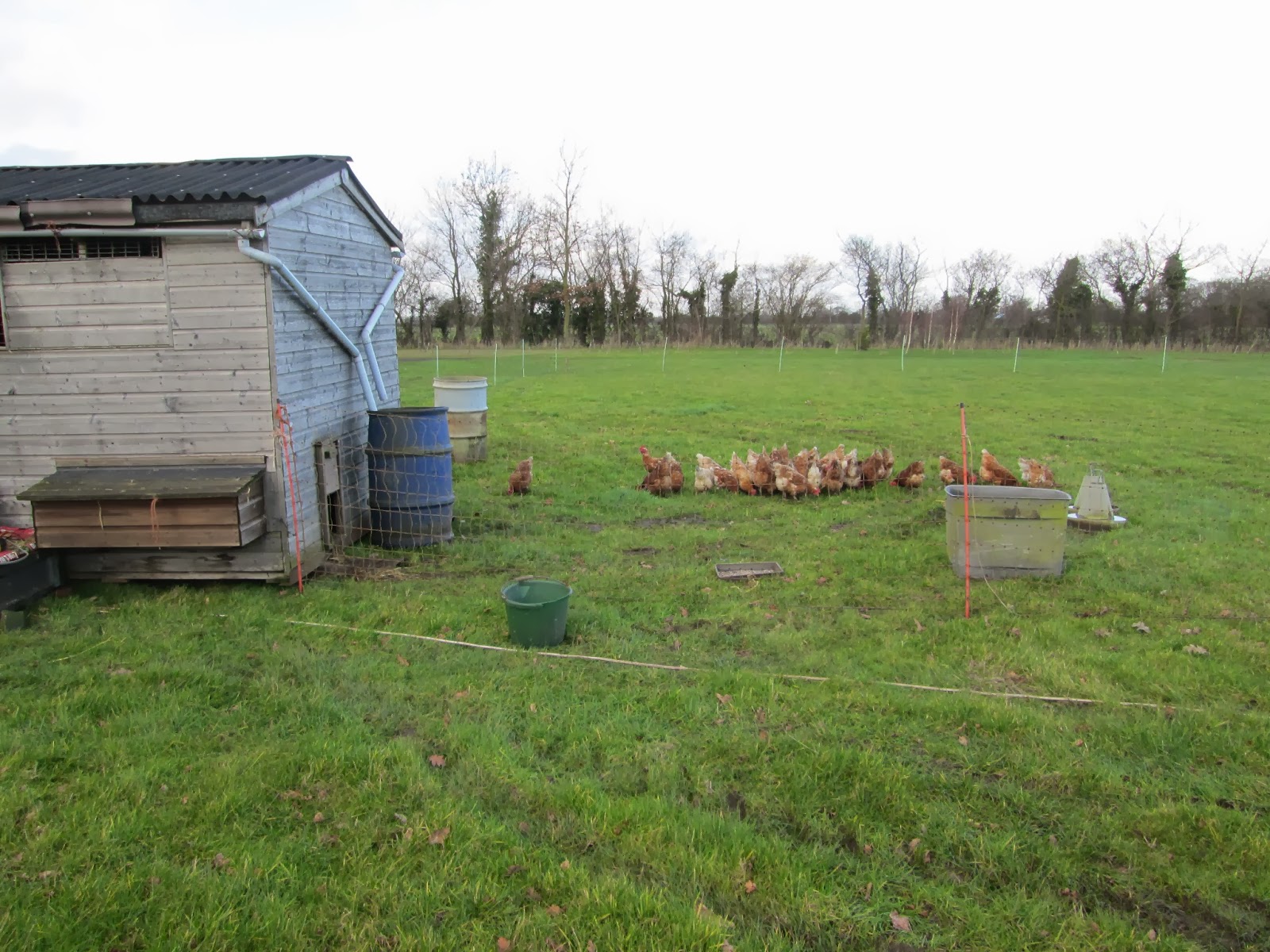 A while later after moving water butt, feed bin, straw bin, drinkers, electric fence and the connection to mains electric for the lighting, the chickens are in seventh heaven on fresh grass.

So a good productive day.Our neighbour is happy with her boat shelter, the chickens are happy on fresh grass, Him Outside is happy to have done both those things and I'm happy with two new books, dry washing, fresh bread, seedlings growing and seeds sown.

Fast Forward a year to 2015, still working hard at the smallholding

We have a Love Hate relationship with the Leylandii hedge between campsite and garden. On the one hand we are grateful to the people who planted it because it keeps the prevailing wind off the house and give us and campers privacy. On the other hand if it's not attacked with hedge-cutter and loppers at least every other year it cuts so much light from the house and poly-tunnels.
It had spread sideways and upwards in the last 2 years and really needed cutting and although Col managed to do the sides of the  hedge with the borrowed lightweight hedge cutter, the top would have been difficult because since the hardly-a-heart-attack he was told not to work  with his arms raised above shoulder level.
So yesterday our future son in law came up and together they worked their way along. Standing on the trailer on the campsite side all the branches went into the trailer. On the house side they used some scaffolding, so we will be picking up the bits to burn during the week. 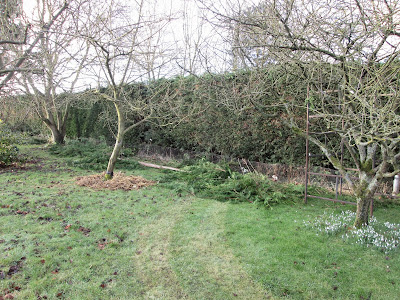 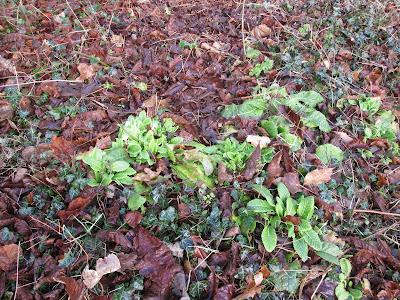 In other parts of the garden things are much slower - no sign of rhubarb yet and only a few daffodil shoots in the bed of daffs that we grow to sell. We got a bit of tidying done in the long flower bed this  morning and tulips look as if they have come through and then been damaged by frost. Our other morning job was cutting back the Autumn raspberry canes. Col has loosened the soil in one of the beds in the middle poly-tunnel and has emptied - by gravity- a tank of water onto it. Then we will barrow in some compost ready for planting the earliest of the early potatoes.


In February 2016 we were waiting to move into Ipswich because Colin had been diagnosed with one of the most aggressive types of Non Hodgkins Lymphoma and had just started treatment.

It's a fact - people having chemotherapy usually have hair loss.
In preparation, last week I cut Col's hair with the number 2 comb and yesterday went all over again with no comb. Just in time, as he found he could grab hold of bits and pull them out.
To keep him company he then cut my hair with the 4 comb - not quite as short but short enough!

Looking at the colour of the hair on the floor you would think we had  been shearing a badger! 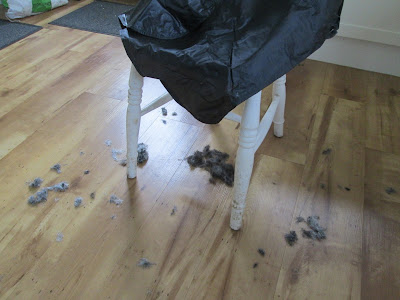 Our youngest daughter had ovarian cancer when she was 18. She lost most of her hair and wore a scarf for the duration. When her hair came back it was darker, thicker and curlier than it had been before. If Col's hair comes back thicker and darker he will be well pleased!

Onto 2017
This time we were waiting to move to here to the cottage, Col had had a year of treatment and had his own stem cells back and we thought things were on the up

There May Be (Faint) Signs of Movement

We've received paperwork and signed it, deposit money has gone into solicitors client account........things may be happening at last on the buying front. I'll still not hold my breath!

On the selling front we had a couple round to see the bungalow Saturday morning, they didn't say much so don't know what they thought.The agents phoned to say the couple were not sure. Shan't hold my breath there either. We are being pestered by other agents all wanting to sell our bungalow. One company have knocked on the door 3 times and sent a letter, why they think they could do better than the company we are with I have no idea. We might drop the price a bit which will move it back to the top on Rightmove, but not until we've moved out and then the agents can show people round an empty house. I've gone off the idea of letting as we know  things need doing here and we could end up paying out several £1000 before we get anything back.

The weekend was a weekend of viewing sport on TV with the start of the Six Nations Rugby and  Davis Cup Tennis, all good viewing. The GB team got through to the next round of Davis Cup because of the young Canadian player swiping his tennis ball away in disgust and hitting the chair umpire right in the eye therefore getting his team disqualified. Ouch! It was 2 rubbers each so they were playing the deciding match although Kyle Edmunds was two sets up at the time so might have won anyway. Good to see so many GB men doing well and not having to rely on Andy Murray. I think there is Snooker on all week before Rugby again next weekend. While waiting to move we have turned into couch potatoes!

The first Saturday Car-boot sale of the season at Needham Market was a bit of a flop - plenty of boots there but I think half were the same ones who were at Portman Road last Sunday.............tat! all I spent was £2 on a huge bag of kitchen paper rolls which was a saving. Although I use a dishcloth for wiping and rags for cleaning we do use kitchen roll as tissues and a few other odd jobs.

I'm still hanging out washing on windy days, and have just covered the rhubarb here with an old dustbin.
No huge Leyllandii hedge to cut thank goodness, just lots of privet and hawthorn. Future son-in-law is still future son-in-law but also proud Dad of Florence
I've not sown any seeds yet, don't need to rush now we only grow for us.
Colin's hair came back after the chemo in 2016 but just as grey as before and we are still cutting hair at home and his is just starting to grow again after the December chemo.
The people who viewed the bungalow that day eventually went on to buy it - thank goodness and we eventually moved in here on March 1st. On the 2nd we found Col's treatment hadn't worked and he started on a trial drug in preparation for donor stem cell grafting.
Now he's had donor stem cells and we have fingers crossed they will work so that he just needs several months to recover.
The Six Nations Rugby tournament starts today, Kyle Edmunds is still doing well in tennis and the first Saturday car-boot of the season is TODAY!

Thank you for comments yesterday and hello and welcome to a new follower.

If anyone knows why there is a line down the middle, which isn't on the draft I'd love to know!