Weather Report from Suffolk and Watch That Supermarket Pricing.

For days we've been told to prepare for some very cold weather with snow....... starting yesterday. "The Beast from the East" is what it's been called, coming in on strong winds from Siberia with the East of England getting the worst of it. I think we're ready. We wrapped up the LPG cylinders with the top of an old gazebo because it doesn't flow well in bitterly cold, we have plenty of wood and checked the oil last week so that's OK

Snow fell, starting around noon, it came down heavily for a while but it didn't lay. I'm expecting to wake up this morning to lots especially as Greater Anglia Railways decided to cancel all trains after 10pm last night - no replacement buses or anything. I felt sorry for anyone working late in London yesterday - suddenly finding they couldn't get home. It will be interesting to see if the weather predictions are correct, the new warnings system sometimes seem to over predict.

While the snow was falling, our new neighbours - who move in later in the week - had a Hot Tub delivered. We've never known anyone with a hot tub - wonder who is moving in? hope they are quiet and relatively friendly, I'm a bit worried that it might have been bought to let out as a holiday home as the only places I've ever seen a hot tub in use is in pictures in holiday brochures......... we shall soon find out.

I went to Tesco last week and didn't intend to buy tea bags, because I'd looked on the Mysupermarket website and they were cheaper almost everywhere else and we still had half a box left.


These are what we buy - after trying all sorts over the years they are our favourite at the moment. A big box of 240 which usually works out cheaper.

£5.99
Luckily, walking up the tea and coffee aisle to see if any de-caf coffee was on offer,  I happened to notice that right next door to the 240 boxes on the shelf they had these on Special Offer........ 300 for just £4 which is several pennies  cheaper 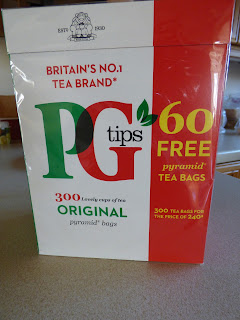 Good thing I noticed..........Should have got 2 boxes!
Wonder how many people picked up the 240 at £5.99 automatically without noticing 300 much cheaper on the same shelf.
You have to keep your wits about you when shopping in supermarkets.

Thanks for comments on names yesterday, I love the way names go in and out of fashion. Even the names we choose for our children in the 1980s are not often used now - yet they seemed quite normal back then.

Posted by Sue in Suffolk at 06:00
Email ThisBlogThis!Share to TwitterShare to FacebookShare to Pinterest
Labels: Shopping, Weather