Strange Times,The April Spending Round Up

Well, we've all got through a whole month of STRANGE TIMES, and it was almost a good month for not spending..................if only there was a way to avoid the unplanned extra expenses!

The boiler repair bill was paid and then the mower repair, they were the two unplanned bills on top of paying the TV licence, then the usual food for me and the cat, direct debits for phones, broadband, council tax and charity and just one lot of diesel. A bit more than usual was spent on postage as I sent parcels to the two 3 year old grandchildren (the cupboard which held all the bits and pieces found at boot sales last summer is now more or less empty, so I hope boot sales start again before the end of the summer)
I sent for vegetable plants to make up for my seed failure when normally I would have got them from a boot-sale or garden centre and bought myself a birthday present.
Despite only going out and doing food shopping 3 times - Morrisons once, Asda once and the local Co-op once, I still spent the usual amount on food due to buying the yogurt mix packs  and getting an order from Natural Collection (for food things I usually buy at the Oxfam shop) which cost more. Although I'm now well stocked with those things to last through May and June in some cases. I noticed some food items have gone up in price -  a coincidence or not? and I might have bought a few extra things? ..........
For instance this is what happened due to going in the Co-op for the post office and looking round the food and standing by the fridge dairy products while queueing to get out - Clotted cream leapt  into my basket! to go with the scones and jam which are home made. 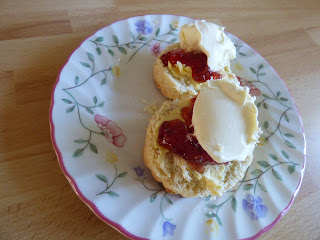 
Looking ahead to May's expenditure...............
My car breakdown cover is due, it's also Eldest Daughter's and Eldest Grandson's birthday but other than that there are no big expenses, so it all depends on how long we are stuck at home.


Did you hear the results of a university survey? Talk about  stating the blinkin' obvious........... . We are visiting food shops less often but when we are there we are buying more! Well fancy that!


Back Tomorrow
Sue
Posted by Sue in Suffolk at 07:39
Email ThisBlogThis!Share to TwitterShare to FacebookShare to Pinterest
Labels: Frugal Month Notes