Thanks for comments on yesterday's post. As I said it was theoretical - just a look at what was available for £9 and how close I could get to a weeks worth of food for one person.

One thing raised on yesterday's post was - How much do I spend on growing my own and is it worth it?

My first thought was that growing your own fruit and vegetables is not so much about the money but more about mental health, freshness, lack of chemicals and self reliance. Of course that's because I can afford to do it - but disregarding all the other benefits - is it worth the money spent?

The total spent on this was around £87. Of course the big pot will be around for years. The ant powder will last more than one year and the moth traps have sticky bits and pheromone things for next year and then I'll only need refills, and some seeds are still in the tin for next year too.

Now the difficult bit .......will my harvest be worth that spend? This is so hard to work out because some of the seeds I've used were bought last year, some were my own saved seed. Plus I'm harvesting things that were planted years ago - like rhubarb and  raspberries that would cost several pounds to buy but have cost me nothing.
I've harvest 14 cucumbers so far and given 8 away, do I count those? do I value them as equivalent to the cheapest at 50p, the large at 85p or the organic at £1 each.

Instead I  ate my first home grown aubergine in a delicious aubergine and tomato sauce. They are just 50p in the shop, but I don't know where they've come from, how many days they've taken to get here, what the people who grew them were paid and what they've been sprayed with.
My aubergine took me 10 seconds from greenhouse plant to pan....................and THAT'S one good reason to grow my own. 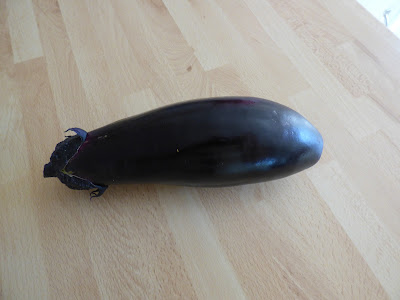 Back Tomorrow
Sue
Posted by Sue in Suffolk at 07:00
Email ThisBlogThis!Share to TwitterShare to FacebookShare to Pinterest
Labels: Aubergines, Greenhouse growing, Growing Food