Not Quite So Strange Times Week 14

Slowly, slowly some things are getting back to normal. People who like buying new stuff in shops are happy, and I'm sure I saw on the news some even fighting to get in! and many queueing for hours and we're all being encouraged to go out and spend. I shan't say what I think about that.
But then a bit of news that was more exciting to me and that's the smaller more local-to-me car boot sale is hoping to re start in July - strict rules and I think it will be very busy because the big Needham Market boot sale is cancelled for the rest of the year.

This week was going well. At the weekend I had a socially distanced coffee with Col's sister, her husband and my niece. They have been seriously shielding as BiL has a debilitating condition that really wouldn't mix with Covid 19. It was so good to catch up. They've found their garden again after not having time to do much for several years, it's looking lovely and productive.

Then Monday  I went to visit the nearest Grandchildren, sat on the floor to play with Youngest Granddaughter but then moved wrong and the blasted knee went clunk and I was stuck on the floor. Poor DiL had to haul me up to the settee! I managed to drive home OK but it put paid to other plans (not that I had any!) for most of the week. I had been so careful not to twist it since the first time -  last December- but will now need to be even more careful.

On Tuesday I delivered Polly cat to the vets. Do you know how much it costs for a cat to have a tooth removed? BIG MONEY! They reckoned it might have set off an infection if it was left wobbly so was better out.

There's been a couple of spells of good rain during the week but not the thunderstorms some parts of the country have suffered. I hope the rain has helped the fruit trees as it looks like a bumper apple crop this year, it certainly plumped up the raspberries.


Food from the garden so far this year 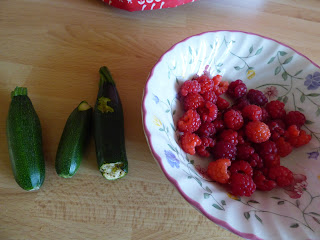 .
Then lots more raspberries and a few more strawberries 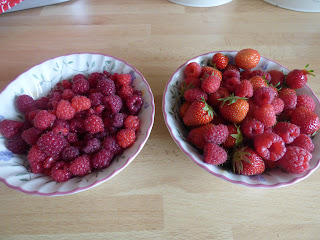 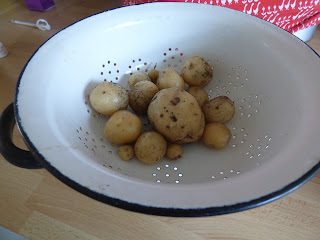 One pound of gooseberries are in the freezer, ready to make Gooseberry and Date chutney sometime.

Oh, I found out where the Mystery Parcel came from - someone in the family - for research because they are planning to do something similar but better value and all ethically sourced. I was able to give an honest account of what I thought of it.

This week I'm grateful for
Hope you have a good weekend. Nothing planned here except for popping out for the Saturday local paper. I might go through books again to see what I can send off to sell and then there is more cross stitch to get done. I'm making the scissor keepers to to go with the two owl scissor cases made so far.

Posted by Sue in Suffolk at 07:00
Email ThisBlogThis!Share to TwitterShare to FacebookShare to Pinterest
Labels: Being Grateful, Courgettes, Growing Food, Raspberries