So* less strange times for lots of people are on the way. But*  as only 5% of the population (think that's what they said, but surely its more) have definitely had the virus, and people can still get it and pass it on without knowing (although I'm sure there is less chance in Suffolk than many other places) and anyway I've discovered how happy I am NOT rushing about here and there, I won't be hurrying to join the masses partying on the 4th of July - now English Independence Day as well as USA!
I'm glad I live where I do because the crowded south coast beaches seen on TV don't appeal at all and not because of being frightened to get out and about but because of the traffic jams, the queues for toilets and the hassle. Felixstowe on a sunny day is Much quieter.

Flowers on the table this week are a mix of all sorts, shades of pink and purple, not just from the cutting garden. 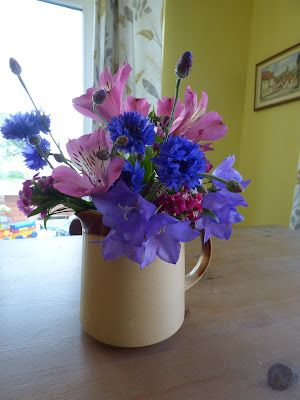 During the week I had to go and pick up my prescription  from the surgery pharmacy and Hooray! the chip shop in the same village is back open, so timing it right I was able to get my first meal in 3 months  that I'd not made myself  -  Pensioners Plaice and Chips = £3.50 - Yum.

Staying inside out of the high temperatures gave me time to read this - and what a good read it was - as I knew it would be. This is the 4th in his series set in the 1930's and 1940's.( Starting with Corpus, they need to be read in order)

In Cambridge, brilliant history professor Tom Wilde is asked by an American intelligence officer to help smuggle a mysterious package out of Nazi Germany - something so secret, even Hitler himself doesn't know of its existence. Posing as a German-American industrialist, Wilde soon discovers the shocking truth about the 'package', and why the Nazis will stop at nothing to prevent it leaving Germany. With ruthless killers loyal to Martin Bormann hunting him down, Wilde makes a desperate gamble on an unlikely escape route. But even if he reaches England alive, that will not be the end of his ordeal.

Rory Clements write good stories although belief needs to be suspended on how many times a person can get beaten up and still carry on!

Here's my weekly updated list of what one "old" woman can grow to eat in a year.


This week I am grateful for
* I was frequently told-off at school for starting sentences with So and But .......it made no difference as I'm still doing it!

Hope you have a good weekend. I might virtually visit this https://www.facebook.com/FelixstoweBookFest - all for free instead of paying to go and listen.

Posted by Sue in Suffolk at 07:00
Email ThisBlogThis!Share to TwitterShare to FacebookShare to Pinterest
Labels: Being Grateful, Flowers on the Table, Growing Food