More Crafts From The Box

The rest from the random box of crafts that I bought from ebay at the end of May.

4 kits - One is to make a felt chicken cushion - Quite ugly. And a cross stitch bag - with Black Aida - and if you've ever tried stitching on black Aida then you know it's not easy on the eyes. Both those have gone in the future car-boot box. There was another piece of Aida and a card blank I've kept in the 3rd kit and the childrens long stitch horse kit had been done all wrong so that was chucked. 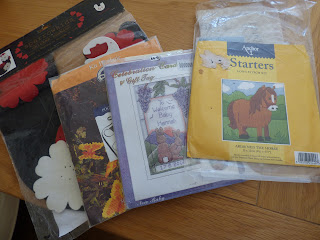 Another children's new long stitch kit of a dog and the felt santa puppet have gone in the cupboard. Wool from the heart knitting is in the sewing box and the Aida and hoop from the penguin kit has been kept. 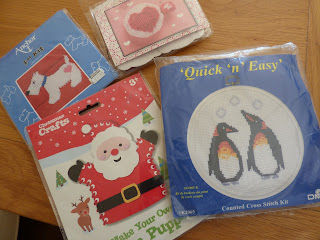 I have no idea what the 2 in 1 quilting tool is, if you want it let me know?  Another felt puppet has gone in the cupboard and the big Craft Collection kit into the car boot box. There was a piece of aida in the centre kit and some material and threads in another. 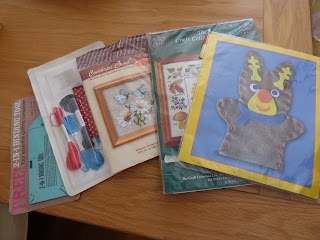 A finished Long Stitch picture of the house on the bridge at Ambleside in Cumbria. Not sure what to do with this, it's not something I would want to frame and keep. 2 dinosaur foam skeleton kits have gone in the grandchildren cupboard. The Cath Kidston Christmas Decorations Kit is a book and a huge bundle of felt pieces to make 12 Christmas Decorations. That's gone in the Christmas drawer.Probably the best thing in the box. 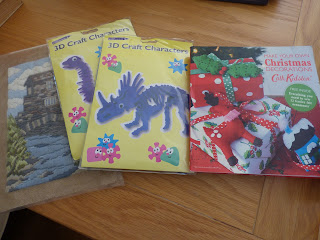 And Finally ................The Poppy Doll kit is for making  a complete fabric ragdoll. That's gone in the car boot box. The hoop is in the drawer with the DMC cross stitch book-mark kit - very pretty. The other thing was a weird piece of stiff canvas for a picture of bits of bamboo - it had been started but there was no chart and no threads. I chucked it - too horrible to keep. 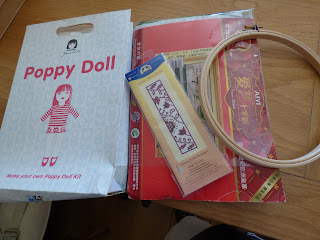 So that was my box of things bought from ebay - was it worth it? Well, quite a lot was kept and several things to sell in the future so I think on the whole it wasn't a complete waste of money and it kept me happily occupied sorting it all for several hours.
But I won't be doing it again!
Back Tomorrow
Sue
Posted by Sue in Suffolk at 07:00
Email ThisBlogThis!Share to TwitterShare to FacebookShare to Pinterest
Labels: Crafts, Cross Stitch, Grandchildren