Strawberries From Another Garden

A week or so ago I asked Brother in Law if he would have any strawberries to spare and he said yes......probably. (He doesn't like to commit himself to anything too much!)
Then on Tuesday night he phoned to say he'd picked nearly 2lb  and would put them in his fridge and if I waited until Wednesday evening there would be a few more.
So Wednesday in the almost non stop drizzle I picked a pound of gooseberries and topped and tailed them, washed lots of jars and in the evening went over and collected just over 2lb pound of delicious plump strawberries. 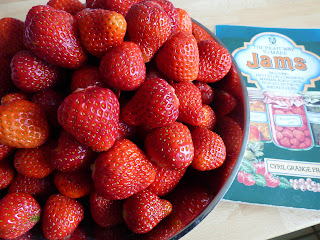 And early Thursday morning  I cooked up the gooseberries in one pan until they were a mush, the hulled and halved strawberries in the jam pan, added the gooseberries to the strawberries then the sugar and  cooked until setting point and made 7 various sized jars of Strawberry and gooseberry jam. Doing the jam this way means it looks and tastes just like strawberry jam but without the problem of lack of pectin.
Scones with jam for another year is sorted.
Back Tomorrow
Sue
Posted by Sue in Suffolk at 07:00
Email ThisBlogThis!Share to TwitterShare to FacebookShare to Pinterest
Labels: In the Kitchen, Strawberries