Spotted this plaque when I walked round the old cemetery in Stowmarket , it's a fairly new addition so I looked on line and found it was placed herein 2013....142 years after the event.

Look at the ages of some of those killed, presumably young factory workers. 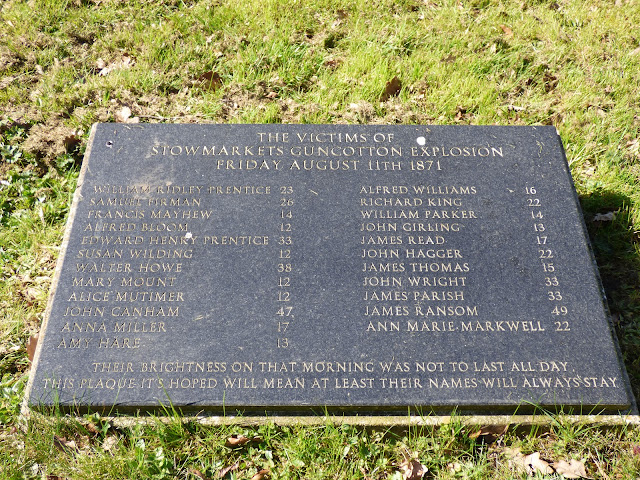 Googling further.......this good report was on a site called "Burials and Beyond" . I'm sure they won't mind me copying it here.

Seemingly every town has a public plaque or memorial to an old industrial tragedy or huge loss of life, the likes of which would have been prevented today. Large-scale industrial accidents were commonplace in the 19thcentury. In an environment with few safety laws (for protecting the workers, not the product), the use of child labour and little understanding of long-term health effects, being working-class was a deadly profession in itself.

In 1898, in the cotton textile industry alone, there were a recorded 7 explosions, 279 falls, 530 burns or injuries from hand tools and over 2,300 non-specified injuries from machines.[1]

In cotton factories, a humid atmosphere was necessary to make the fibres pliable enough to twist into thread, but also resulted in clouds of dust and airborne particles that seriously affected the lungs of workers, but also proved to be dangerously flammable. In the newly-industrialised cotton factories, the – primarily female – workforce often lost fingers, broke bones and crushed limbs. Due to low-hanging belts of machinery, many women had their hair pulled into the mechanisms, scalping them instantly.

Guncotton is a mild explosive, used in a variety of ways, from usage in rockets to leather finishing, ink bases and early plastics. To create guncotton, clean cotton is broken down and mixed with nitric and sulfuric acid. Understandably, Victorian guncotton factories were accidents waiting to happen.

The Stowmarket Guncotton Explosion occurred on a Friday afternoon, on 11thAugust 1871. The explosion killed 28 and injured a further 70. Many of the victims were young people and nine of the dead were children:

At the time, the death toll was played down and the true cause (whether accidental or intentional) of the explosion, has never been established. The victims of the explosion and their families never received the closure or acknowledgement they deserved. It took until 2013, 142 years later, for 23 of the deceased to be commemorated on a cemetery plaque. The memorial only records the 23 people buried within Stowmarket Old Cemetery, not the 5 other fatalities who were buried in their respective parishes. While we can be appreciative of the fundraising and efforts of Stowmarket History Group, to (presumably, accidentally) exclude others on the basis of the location of their remains seems a great shame and does a disservice to the suffering of so many in the industrial workhouse. A problem facing such memorials could be seen to apply to the Stowmarket tragedy – both Director Edward Henry Prentice (33) and William Ridley Prentice (23) were killed in the blast. Although no culpability was officially found in the Prentice family, their status in relation to the workers, the working conditions they provided and their family’s lack of recompense to the survivors and victims’ families presents a moral quandary; especially in terms of public memorialisation.

The ‘Stowmarket Guncotton Explosion’ was in fact two large explosions, that ripped through the Prentice’s Guncotton Factory in Stowmarket, Suffolk. The explosions were so incredibly loud that the sound rattled the windows of houses thirty miles away. The nearby railway line was completely ripped from the ground and over 188 cases of deafness were reported.

The first explosion was recorded at 2.05pm when three magazines containing 14 tonnes of guncotton exploded, killing twelve people. Subverting the ‘heartless factory owner’ trope, Edward and William rushed to rescue workers who were trapped in burning buildings but were subsequently killed in the second explosion.

The cause of the explosions remains a point of contention. They may have been sulphuric acid willingly added to the product, the combustion of several tonnes of guncotton due to the summer heat or simply a tragic result of poor health and safety. Whether it was a wilful or accidental act was unclear at the time and suspicions were rife. The British Government issued a reward for £100 for any information, yet no leads came forwards and the reward is still unclaimed.

“The reward (of £100) will be paid by Her Majesty’s Government to any person who shall give such information as shall lead to the Discovery and Conviction of the Perpetrator or Perpetrators of this Outrage.

“A FREE PARDON will be granted to any Accomplice, not being the actual Offender, who shall give such information as shall lead to a like result.”[3]

Guncotton was intended as a safer and more efficiently-produced alternative to gunpowder, yet its production methods proved to be far more dangerous than its competitors. In October 1914, another Stowmarket building (used for processing raw cotton) caught fire and illuminated the town, yet thankfully there were no fatalities. The business of guncotton proved lucrative well into the 20thcentury, produced in Stowmarket alone well into 1942. Prentice’s Guncotton Factory rebranded twice before landing on New Explosives Ltd and were successful until the introduction of foreign imports forced them to merge with other companies.

The inquest for the 1871 explosions lasted almost a month, with the jury verdict reading that.

“We find the explosion was produced by some person or persons unknown adding sulphuric acid to the gun cotton subsequent to its passing all tests required by Government.”

Although I knew about the tragedy, I didn't know about the memorial so it was good to discover it and find out more.

Also interesting to see that the surnames on the plaque are all names that are still common in the area now.

Posted by Sue in Suffolk at 07:00
Email ThisBlogThis!Share to TwitterShare to FacebookShare to Pinterest
Labels: History, Stowmarket