The first of April, some might say,
Is set apart for All Fool's Day,
But why people call it so'
Nor I nor they themselves do know
From Poor Richard's Almanack (1760)

One book I have says that perhaps 1st April became April Fool's Day because it was the last day of the festivities when the New Year began on 25th March or maybe it was a protest from moving the New Year.
(and some might say I was a fool even thinking about moving during a pandemic - they might be right!)
The Romans called this month Aprilis from the verb aperire (to open). The Anglo-Saxons named this month after a goddess - Eosturmonath, the month of Eostre, goddess of the dawn.
One of the April pages from The Diary of an Edwardian Lady 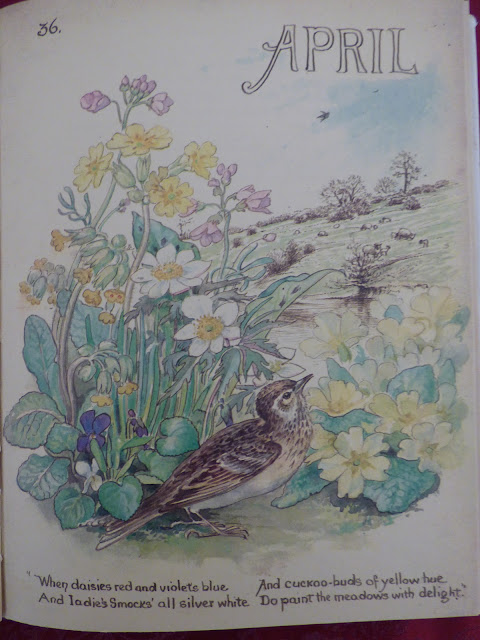 I've got the measurements for the two front bedroom windows which have curtain rails at the bungalow (My old ones had the rings in for poles and one set wasn't deep enough anyway so I left poles and curtains behind) so I'm going on an adventure to The Range today to see what I can find - They've been open compared to Dunelm who've had to stay closed.
While I'm out might as well go in the nearby Asda and get some bits for Easter - not that there is much planned but I should get to see the 3 Suffolk grandchildren at sometime........ not buying chocolate eggs though. They always get loads.
Perhaps then a KFC (which will send a shiver of horror through some people!) but at one a year I'm sure I'll survive.
(Still time to leave a comment for the Richard Osman Book giveaway. I'll sort it over the weekend)
Back Tomorrow
Sue
Posted by Sue in Suffolk at 07:00
Email ThisBlogThis!Share to TwitterShare to FacebookShare to Pinterest