Turning Into a Book Blog?

With not a lot to do here this blog is threatening to turn into a book blog. Books and TV are my time fillers at the moment and it's very frustrating!

But it is what it is and won't be forever.

Anyway back to Debenham library last Saturday to pick up some more requested books. 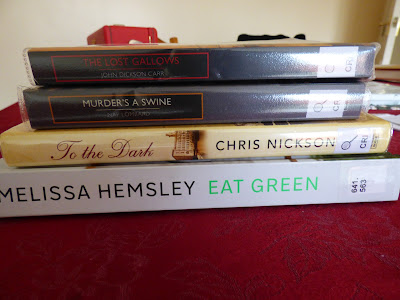 I shall take the cookery book back fairly quickly -  because each recipe has about 15 ingredients and feeds 4+!

The other 3 all look good - crime fiction of course!

From those picked up the week before - pictured below. 'Solo' was another cookery book that's gone back already. But my favourite read out of the rest was V2 by Robert Harris.
The story covers just five days at the end of November 1944 and as Harris says " the framework is factual" although the main characters are fictional. 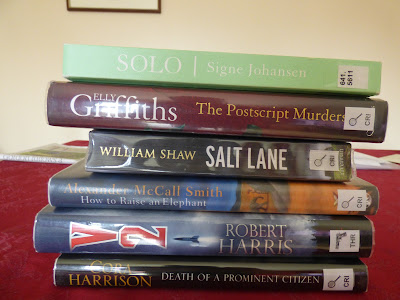 The book begins on the Dutch coast, in an area still held by the Germans. It's from this spot in the forest that they have been firing the lethal V2 rockets to destroy London. The story is mainly about Rudi Graf a young German scientist  whose interests in rockets for space travel means he is soon involved in the building, testing and firing of the V2 rockets.
In London an officer in the WAAF - Kay Caton-Walsh - finds herself surviving one of the rocket attacks while in the home of her lover. Almost immediately she joins a small team of WAAFs sent out to Belgium to help work out from where the V2 rockets are being fired.
The last part of the jacket blurb says "But for every action on one side there is an equal and opposite reaction on the other. As the death toll soars, the separate stories of Graf and Kay ricochet off one another until,in a final explosion of violence, their destinies are forced together"
Both find they have been lied too by those in charge.
There are some awful facts in the acknowledgements ....20,000 slave labourers died building the V2 rockets and manufacturing sites. While about 2,700 people died in London, 1,700 in Antwerp and around 600,000 homes were destroyed or damaged.
The V-weapons programme has been described as 'by a distance the greatest waste of resources by any combatant country'
Such a good writer - this is the third of his books I've read.
Back Tomorrow
Sue

Posted by Sue in Suffolk at 07:00
Email ThisBlogThis!Share to TwitterShare to FacebookShare to Pinterest
Labels: Book Reviews, Library book photo