A Week Is A Short Time In Suffolk

A Week Is A Short Time In Suffolk.....in other words ............. Saturday comes around far too quickly.
Thank you for comments yesterday, all interesting views - even from someone called Boris! (surely not?) I'm no further forward in understanding how my life is being completely destroyed as it certainly doesn't feel like it.
My favourite comment was from Jane!
Last Saturday's car boot sale was busy with buyers and lots of the sellers had Christmas decorations and other seasonal bits for sale.
The small things I found weren't a big spend.......2 cards, 1 book for Middle Grandson (he used to be Youngest Grandson but has now been promoted!) , a book about Suffolk that I'd not looked at properly before, some crocus bulbs and a Candlestick Press instead-of-a-card booklet......  total spend £3.20. 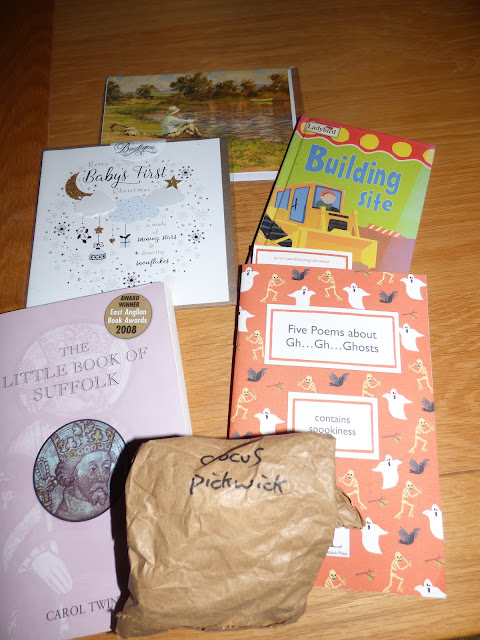 But then I bought a pear tree for £12. A pot-grown Conference pear tree from a boot-sale is a bit of a risk  but at half the price of something similar from a tree suppliers catalogue it's worth a try. In the past we had success even with the cheap supermarket trees. This one was a good size and probably a reject from a nursery as it was a bit wonky in the pot. 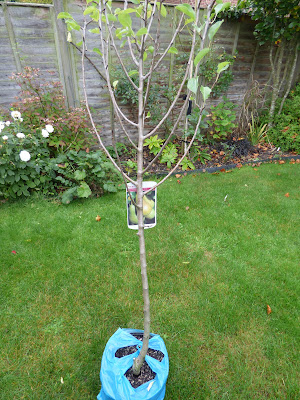 I got it planted the same day, straightening it up as I planted. It could really do with staking before windy weather. Another bit of my plan to fit in as many productive things as possible into my small garden.

This week has been another week of mixed weather - typical Autumn. I went shopping on Tuesday and got really warm walking through town and even Morrisons felt warm, when I got back to the car I found out why.............. I was dressed for Autumn but the temperature was 20℃. There were some spells of heavy rain too during the week - I choose to go for a walk through the woods one morning after heavy rain - t'was a bit muddy, which must have put people off, as there wasn't a soul about. The new header photo is of the colours on the edge of the wood.

At the WI......where I've now joined properly,  most people had a Fish and Chips meal (a celebration of being back to normal meetings) but I opted out as I don't like eating a big meal as late as 7.45pm. Then we had a man from the village talking about how he's now self published 4 children's books and one of the committee members talking (going on and on actually!) about the large sack of daffodil bulbs which she has bought for members to plant around the village.(Just hope she never becomes President as no one else would get a word in !)

I picked up a free newspaper when I was out, there was a page about pensions and the Pensions and Lifetime Savings Association. Apparently there are three standards that are constructed to give people an idea of the lifestyle they want at retirement and therefore how much they should be paying into a pension .
"Of course most of us would want to slot contentedly into the comfortable retirement living standard, the threshold for which is £33,600 for a single person and £49,700 for a couple. At this level of income retirees can expect to enjoy some luxuries like regular beauty treatments, theatre trips and three weeks holidaying in Europe each year".
Ha! Sadly I don't quite slot into this "comfortable" living standard - Thank Goodness!!
This week I am grateful for......
Have a good weekend.
I shall be back Monday
Sue
Posted by Sue in Suffolk at 06:00
Email ThisBlogThis!Share to TwitterShare to FacebookShare to Pinterest
Labels: Apples and Pears, Being Grateful, Car Boot Bargains, The Garden, WI