It was the mention of St Audrey's Day last week that reminded me of my stay in a private girls boarding school of that name many years ago.
I searched out the photo, from the summer holidays of 1971. This is a photo of everyone who stayed at St Audrie's school on a Baptist Chapel Fellowship of Youth House Party. The school was in West Quantoxhead in Somerset. People came from all parts of the country. 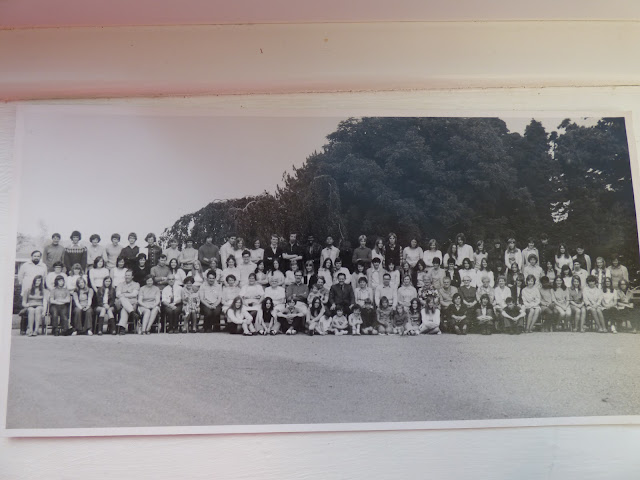 We had two weeks of visits out around the area and a chapel service each evening, quizzes and walks . It was a good fun. I wonder where everyone is now.
That got me thinking of other group photos from the past.............
This one below is from about 1976 . It's me and lots of other Cub Scout Leaders on a weekend training course somewhere near Norwich. I had to do the course in Norfolk because Suffolk Scouts weren't running that course that year and I needed to do it before finishing the third and final part of training. 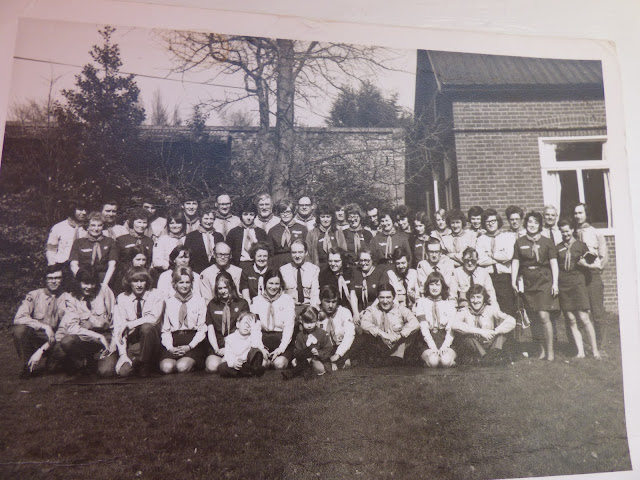 Slightly more recently, the group photo below is of a school reunion I helped to organise in 1988. These are some of the people who started at Stowmarket Grammar School in 1966. Plus some of the staff from the time. It was difficult to track down everyone (this was before the internet got going) - so many had gone to university and headed off to work abroad. Quite a few had been living at RAF Wattisham where their fathers worked - no way of finding them 20 years later.Some people we found refused to come to the reunion because they'd hated school! I found that really sad.  There were about 80 people in our year from all parts of East Suffolk except Ipswich - where they had their own Grammar Schools. 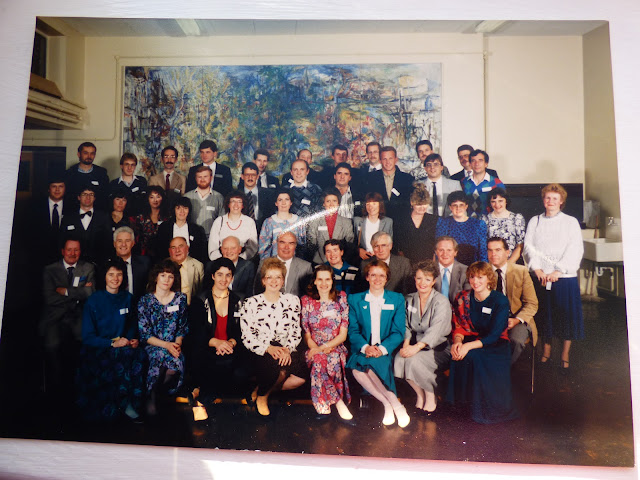 I'm third from the left sitting at the front. 3 of us got together to organise the reunion which we held at the school. It was such a surreal evening. The school became a comprehensive in 1971 and has just been knocked down with a new school built in much the same place. Sadly I know at least two of these in the photo the same age as me passed away within the last two years.
Below is  group photo from about 1990. It's Stowmarket District Cub-Scout Camp held at Old Buckenham Hall (OBH), a boarding Prep School in Brettenham near Stowmarket. Our Son was a cub at the time and the girls sitting down the front are our girls.....back then girls couldn't join a Cub Scout Group - unlike now - (and Youngest Daughter is only about 3 years old )but we always took them with us to everything except the weekly pack meetings. I'm standing at the back but Colin isn't in the photo - we could never think why and actually now I look closely I'm not sure our son is in the photo either! 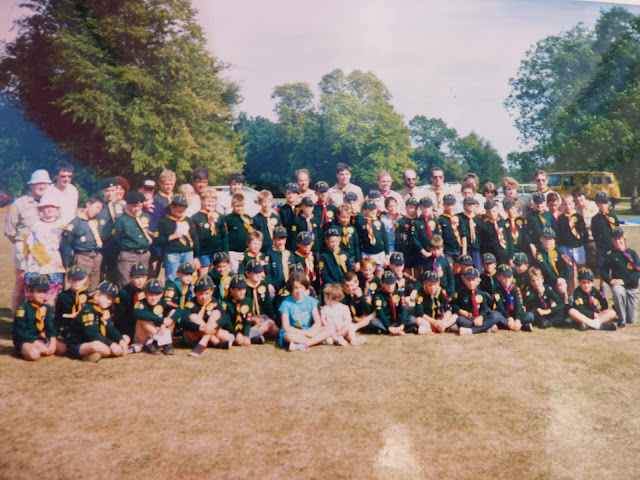 The cubs and the leaders are from packs in Haughley, Bacton, 1st and 3rd Stowmarket, Combs, Mendlesham and Needham Market. I think this was the last Cub Camp held here as the Headmaster - a lovely man called Don Sewell retired and the new head didn't want anything to do with Scouting. We also held Cub Scout District Football Tournaments here. I've got a photo of "my"cubs being awarded the trophy one year.
Happy memories
The new  TV series based on Ann Cleeves Book The Long Call started promisingly last night. From what I can remember it's really close to the story. For some reason ITV are showing all four parts of the story at 9pm this week. I wondered if they planned it to clash with Shetland at 9pm on BBC on Wednesday. Although with catch-up on all channels there doesn't seem any point.
Back Tomorrow
Sue

Posted by Sue in Suffolk at 08:04
Email ThisBlogThis!Share to TwitterShare to FacebookShare to Pinterest
Labels: Memories