I'm not vegetarian but I rarely eat meat now, I just don't like it much anymore.( Plus after nearly 20 years of producing our own, nothing bought can compare). So I've been trying out some different frozen vegetarian things that I can pop in the oven and then eat with a big heap of fresh veg.

The Co-op Goats Cheese and Vegetable Lattices.........bottom right.......... are delicious, I've been buying these for several years. They are full of flavour and are (I think) £1.79 for the pack of two - so 90p for my meal. I eat these with a big heap of steamed or quickly boiled vegetables but NOT potatoes, mainly because the Lattices are pastry so spuds are not needed but also because after cooking potatoes for Colin for 38 years (he loved potatoes mashed ((shudder)) and whole plain boiled ) I just don't buy them or eat them often. (Except when I have pensioners fish and chips!) 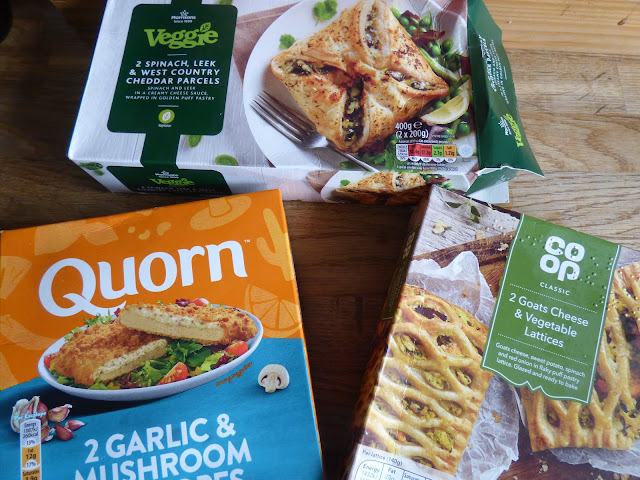 A few weeks ago  when I went to the Co-op they didn't have the Lattices so I bought the Quorn Garlic and Mushroom Escalopes instead. I think of  Quorn as  "artificial meat", it's OK but not wonderfully tasty and I  avoid eating it very often . My verdict on these is.............. Edible but not outstanding and they need something  really tasty served with them to give a bit of flavour. I ate the second with some sweet onion chutney(marmalade) on top and that improved it immensely. I think they were a bit more expensive than the Lattices.

Next time I went to Morrisons and saw The Spinach, Leek and West Country Cheddar Parcels I thought they would perhaps be a bit similar to the Co-op bakes but they weren't. Instead I found the first one Totally Tasteless, and  I'm not sure where the cheddar was. So when cooking the second I added some grated cheese on top for the last few minutes in the oven which improved things a bit but they won't be bought again. They are £2 for the pack of two at the moment.

Back Tomorrow
Sue
Posted by Sue in Suffolk at 06:00
Email ThisBlogThis!Share to TwitterShare to FacebookShare to Pinterest
Labels: In the Kitchen