It's Saturday Once More

I've not had flowers on the table for a while but after the first frost on the car windscreen on Wednesday I brought in the last of the roses to enjoy for a few more days. 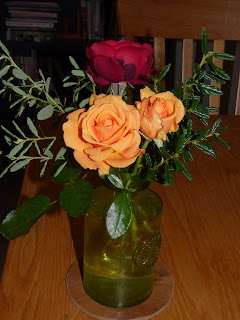 The weather was good for gardening on Monday and Tuesday and I was able to get all sorts of jobs done. So the sand that was under the slabs where I'm putting the 3 Minarette Apple trees has been put on the veg beds to be raked in later and  the weed suppressant membrane has gone.  Someone commented that the space half prepared for the trees isn't big enough, but the trees on order can be planted just 2 feet apart as they grow straight up with hardly any side branches.
The pepper plants and aubergine are now all finished so the pots from the greenhouse have also been emptied onto the veg beds  and behind the shed there was a heap of small bits of turf which had rotted down so that soil has also been put on the veg beds too. (I'm glad I didn't order two builders bags of top soil as BiL reckoned were needed, because one was plenty with all the other additions)
Then I got busy out the front cutting back some of perennials.
There has been much talk of the Government "saving Christmas" this week.............Christmas 🎄comes in a truck apparently, trouble is there's no one to drive them. (This isn't a sudden problem - for years there have been warnings about aging drivers (like aging farmers - the average age of a farmer is already around 60).
This reminded me so much of the famous Christmas 🎄episode of  The Good Life. Margo's Christmas 🎄 is delivered in a van on Christmas Eve but when the Christmas tree 🎄 is 6 inches too short she sends the whole lot back. There are (shock horror!) no deliveries on Christmas Day 🎄 so Margo and Jerry end up next door spending their day with Tom and Barbara.🎄 Here the Christmas crackers are made from newspapers and have no snap so they have to shout Bang! instead, but the company is so much better than their usual Christmas 🎄and it all ends happily........of course.
I'm just so thankful that my Christmas 🎄 isn't waiting to be delivered in a truck and I don't need anyone to save Christmas 🎄 for me.
Friday was another good day for getting things done as Brother -in -Law came over to put new tyres on my bike. When he was looking after it while I was moving between holiday lets he'd pointed out that the tyres looked pretty bad so I'd eventually got around to buying new and he was able to get them sorted. While he was here he also drilled some holes in the bottom of a huge plastic pot so I could re-pot my Olive tree and then he managed to get the wooden shuttering out from around the greenhouse concrete base. I'm pleased about getting that done as now the wood can be used for edging a new raspberry bed. Lots of work needed to make it........removing turf and digging etc but I'll get there eventually.
This week I'm grateful for.............

I do love it when something unusual happens. I glanced up Friday afternoon just at the sun was sinking behind the houses out the back and spotted............... 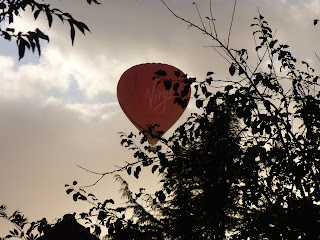 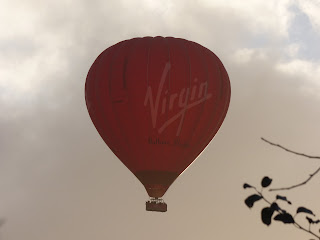 Not a common sight for Mid-Suffolk.

So the weekend is here again......... starting with the car boot sale of course, not many left now before they finish for the winter.

Have a good weekend

Posted by Sue in Suffolk at 06:00
Email ThisBlogThis!Share to TwitterShare to FacebookShare to Pinterest
Labels: Being Grateful, Christmas, Flowers on the Table