And Now It's The Last Saturday In June Already

The first thing I want to say about this week is "I want my £600 that you gave away!". Twice I've heard Grant Shapps the Transport Minister say that during the pandemic they helped out the rail network with millions of £s, equating to £600 per household. (This is one of those fairly meaningless things that politicians come out with). I don't use railways so can I have my portion here instead please! The transport minister has been interviewed a lot this week due to the Rail Strikes. Causing so many problems for many people trying to get to work, school exams etc etc. The railway unions want more money (who doesn't) and no modernisation of working practices (back to steam?). Hope it's not the start of a "Season of Discontent" - I remember the last time!

Whoops, straying into politics - better get out ....quick.

A few small pretty things in an old jar for this week's Flowers on the Table. The Alchemilla Mollis, Pinks and Astrantia are all things planted since I moved in and the Lavender was here when I came.If only they looked as good in the jar as the Flower Festival Arrangements in yesterdays post! But I'm a shove-it-in-the-vase flower arranger with no patience for fiddling! 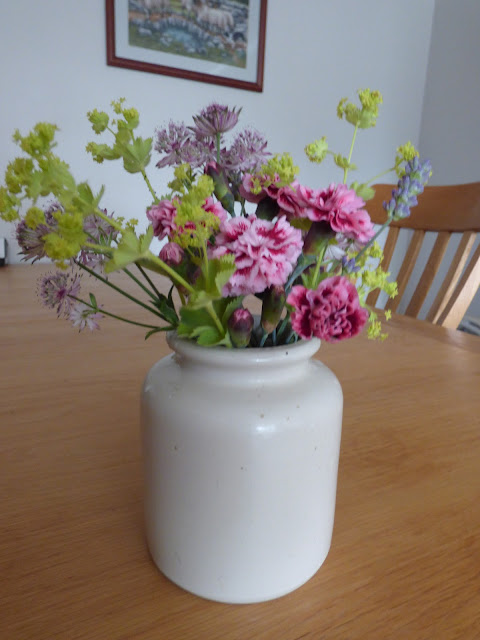 More sitting in the sun and reading has been done, although I'm a bit torn, as the BBC had some Wimbledon Qualifying on the red button  which is interesting to watch for the up and coming players.Plus Eastbourne Men's matches were on Amazon Prime. (Women's was on BBC2 but I can never get into Women's tennis because they seem to come and go and I never know who they are plus they  shriek and squeal  too much.) The new kids on the block for GB men are Jack Draper and Ryan Penniston who have both done well and Cam Norrie has been seeded 9 for Wimbledon next week which is all looking hopeful.

The reading has actually been re-reading, one accidentally and another on purpose. A copy of a book of Agatha Christie's short stories was on the shelf - While the Light Lasts. Her early writing from the 30's. It didn't take me long to read  and then when I went to write the title in my Book of Books Read I found it  already there - Oh well. Most of Christie's books were listed, I read lots in the 70's when I first started work in a library. I've now made a note of the few that I've never read and will look out for them.
The other re-read is this, a favourite book, dating from 2009. 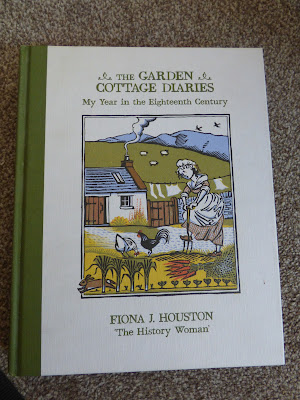 "Challenged to prove her claim that an 18th-century diet was better than today's, for a full year Fiona J Houston recreated the lifestyle of her 1790s rural Scottish ancestors in a basic one-roomed cottage, cooking from her garden and the wild, often entertaining family and friends, and surviving on her own resources. She learned lost crafts and skills, making nettle string, quill pens and ink as well as cheese and ale, lighting her fire from flints, and dressing in hand-sewn period clothing, with nothing but an old range stove and candles for warmth and light."

This picture below is my reason for not eating Wartime Rations like Carolyn is doing on her blog with a few other people joining in. Although it's interesting to read about, I'll wait until rationing is forced upon us - and hope it never is.
I love fresh fruit and this has been my fruit 'ration' everyday for two weeks with strawberries from my tubs, a small English apple from Aldi (6 for 89p) and a few grapes also Aldi now £1.75 for 500g. The grapes will survive for most of a week in the fridge and I layer the bunches in their punnet with a couple of bits of kitchen roll to absorb any moisture. 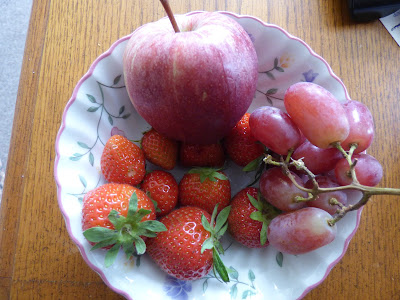 Hope you all have a good weekend......Finger's crossed for fine weather as we have a family get together this weekend. We are all over to my Sisters for her special Wedding Anniversary. Eldest Daughter etc was due to come up from Surrey and stay overnight here but Son in Law was away working in France and came back with Covid.........so they won't be coming - sadly. Blasted Covid is still around.

Back Monday
Sue
Posted by Sue in Suffolk at 06:00
Email ThisBlogThis!Share to TwitterShare to FacebookShare to Pinterest
Labels: Being Grateful, Flowers on the Table